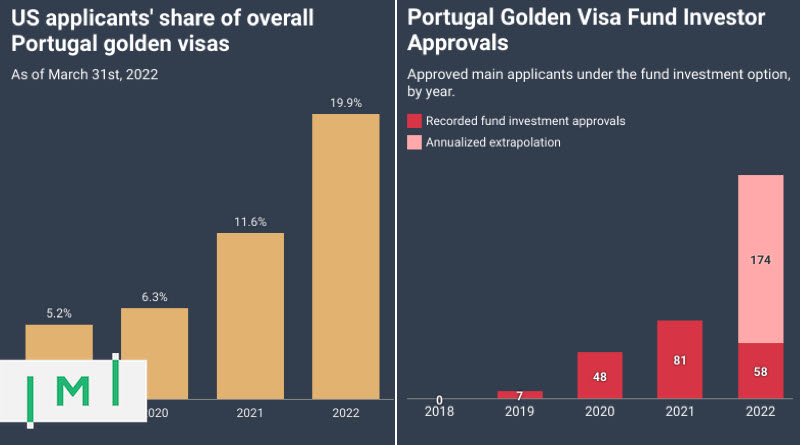 For the last year and a half, American participation in Portugal’s golden visa program and the share of applicants who choose fund investment have both risen sharply. That’s unlikely to be a coincidence.

In the first quarter of 2022, Portugal’s program raised some EUR 125 million (almost exactly the same amount as during the same quarter last year) from 261 main applicants, who invested an average of EUR 478,000 each, the lowest per-investor average investment figure on record. The average family size (2.06) has also reached a nadir in 2022.

Americans have been the top investor nationality so far in the year, accounting for 53 main applicants (19.9% of the total), while the conventionally largest investor nationality, China, counted 43 investors (16.5%). Q1 2022 marks the first quarter of the Portuguese golden visa's history in which Chinese were not the top applicant nationality.

The American share of the program has risen inexorably since the start of the pandemic, roughly doubling from 2020 to 2021, and is on track to - at least - double once more this year.

Rising American interest in the program has coincided with a similarly precipitous rise in the share of investors who opt for the fund investment route to qualification. Already by the first quarter of 2022, fund investment has exceeded the 2020 total and nearly three-quarters of last year's aggregate.

Fund advisors with whom IMI has been in touch explain that Americans, more so than most of the other large applicant nationalities, favor the fund category over other qualifying options; US investors are generally more accustomed to investing in securities, thanks to the country's long history of public trading and its high number of accredited investors. They appreciate the regulated nature of the CMVM-accredited funds and their relative tax efficiency as compared to the roundtrip transaction costs of real estate investment.

If you like these charts and graphs, you will love the IMI Data Center, in which you'll find 17 different graphs covering all angles of the Portuguese golden visa program, as well as more than 300 graphs on dozens of the world's most popular investment migration programs.