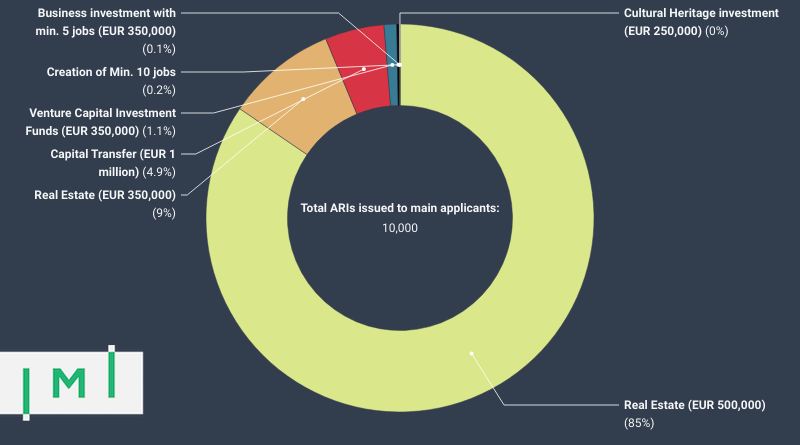 In last month’s statistical report on the Portuguese golden visa, we noted that the program was just 61 applications shy of approving its 10,000th investor. In the month of September, the SEF approved precisely 61 main applicants, reaching the 10,000-milestone by a hair’s breadth and becoming the first European residence by investment program in history to do so.

The average per-applicant investment amount, however, has been slipping in recent years, chiefly as a consequence of investors' growing preference for "fixer-upper" real estate, fund investments, and commercial property, all of which have lower capital requirements than the conventional EUR 500,000 direct property acquisitions.

Though the latter category still accounts for nearly two-thirds of applications, this share is likely to fall sharply next year as the new program rules - which disqualify the country's hottest property markets from this category (see map) - take effect. Average per-applicant investment is likely to continue dropping for the same reason.

With just one quarter left in the year, the program's total receipts amount to EUR 326 million, indicating total investment for the year will land at around EUR 400 million, significantly lower than the EUR 647 million it raised last year.

Americans have featured in the Top 5 applicant source countries list in each monthly report this year and for 15 of the last 16 months. So far this year, 54 American main applicants have been approved which, on an annualized basis, is in line with the trend that started last year, when 75 Americans were approved.

As noted in previous monthly reports, the declining approval volumes in Portugal's program are not necessarily a function of waning program interest but, rather, sluggish productivity at the SEF. Recent research from US-based investment migration advisory Global RCG - which periodically surveys Portugal golden visa service providers for real-time data on current processing times - it now takes the SEF more than 400 days from when it receives a golden visa application until it issues a decision.