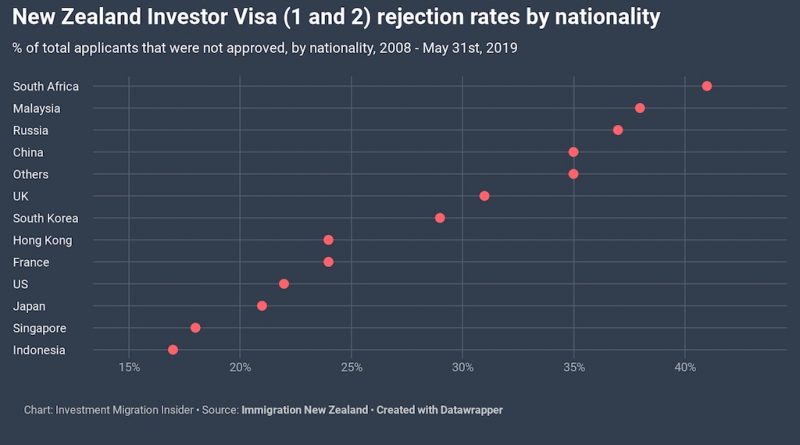 New Zealand’s two investor visa categories have raised close to NZ$6 billion since 2008, two-thirds of which from Chinese applicants. But Kiwi authorities have also left NZ$2.7 billion on the table due to their sky-high rejection rates.

With one calendar month left in New Zealand’s fiscal year, the country’s two investor visas have attracted capital injections worth some NZ$ 1.2 billion since July 1st, 2018. While accounting for fewer than a third of overall applications, the NZ$10 million category 1 visa contributed NZ$720 million, or nearly two-thirds of total investor visa revenue. Category 2, meanwhile, has seen 155 participants invest close to half a billion dollars over the last 11 months.

Since opening in 2008, Chinese interest has dominated both investor categories; in aggregate, 65% of approved applicants (and 70% of those rejected) hailed from Mainland China. A very distant second, Americans have received 7% visa approvals, the British 5%, the Japanese 3%, while Singaporeans, Hongkongers, and Malaysians each accounted for 2% of approvals.

New Zealand’s programs are singular in one respect; they have higher rejection rates than any other residence or citizenship by investment program. Of the 2,901 investors who applied for one of the two visa categories since 2008, 974 (34%) saw their applications turned down.

See also: Malta Rejects 1 in 4 Applications for Citizenship by Investment

Hundreds of companies can assist with applications to the New Zealand Investor Visa program. To see which ones, visit the Residence & Citizenship by Investment Company Directory.

While rejection rates in New Zealand are high across the board when compared to similar programs, there’s great variance among nationalities; while five out of every six Indonesians and Singaporeans got the green light, authorities turned away 41% of South Africans, 38% of Malaysians, and 37% of Russians.

As a consequence of its high standards, New Zealand has forfeited some NZ$2.7 billion in potential investments.

July 6, 2022 Christian Henrik Nesheim Comments Off on 9 EU Countries That Grant Citizenship to the Great Grandchildren of Their Citizens