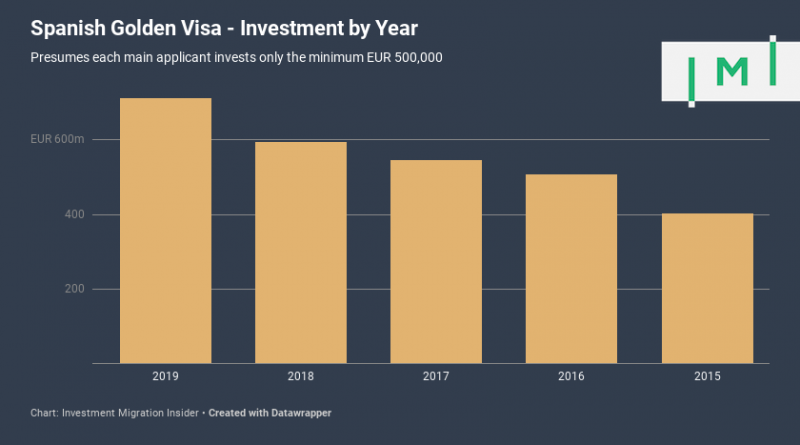 Recently released figures from Spain’s Ministry of Labor shows the country’s golden visa program approved a record 1,422 main applicants in 2019, up from 1,188 last year. Since 2014, the program has welcomed 5,515 main applicants and raised – at the very least – EUR 2.8 billion in the process.

Although their participation numbers were markedly lower than during the first half of 2019, Chinese applicants still accounted for some 38% of investments during H2 2019, followed by Russians, at 17%. In aggregate, since inception, Chinese applicants now account for 35% of participants while Russians make up 24.6%.

While many program participants invest amounts far in excess of the minimum EUR 500,000 real estate acquisition, detailed figures on investment amounts are not publicly available. Nonetheless, even presuming each main applicant invests only the minimum, Spain will have raised some EUR 2.8 billion since opening the program in late 2014, more than EUR 700 million of which in 2019 alone.

See also: How Spain Became a Golden Visa Powerhouse Without Even Trying

Worth remarking is that Spain’s Golden Visa program is now larger than that of Portugal (and second in Europe only to Greece), not only in terms of participants (Portugal approved only 1,245 applications in 2019) but also very likely in annual investment amounts; Portugal reportedly raised EUR 742 million in 2019, a figure that is accurately tracked. Although no precise FDI figure for Spain’s golden visa is available, it is almost certainly greater than EUR 800 million.

Spain’s success comes despite the observation that investor migrants who choose the program pay considerably more per square meter of real estate than they would in competing programs like those of Greece, Portugal, Cyprus, or Latvia. In our analysis from September, we found that – adjusted for differences in required investment amounts – golden visa investors get three times more square meters in Athens than in Madrid.