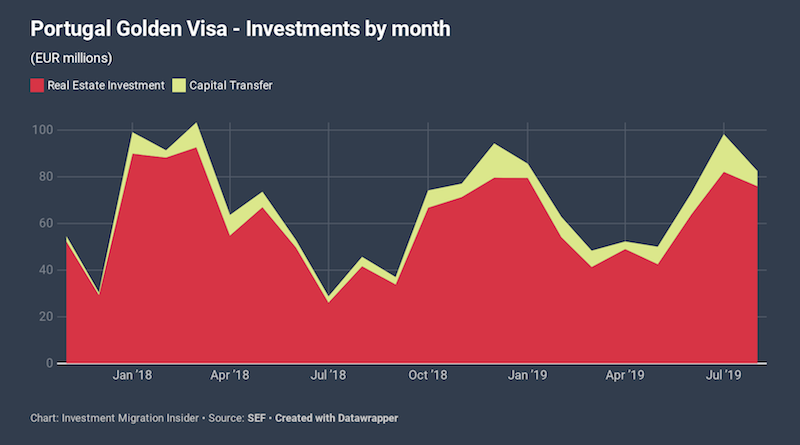 By the end of August this year, Portugal’s residence by investment program, the Golden Visa, had raised EUR 553 million, statistics released by the SEF today show.

In August alone, 147 main applicants invested EUR 82.5 million. This brings the program’s total revenue since opening in late 2012 to some EUR 4.8 billion. So far this year, 923 main applicants and 1,549 of their family members have received residence permits through the program. In all, since the program opened, 7,885 investors and 13,364 dependents have participated.

Chinese investors remain the top applicant group, but their relative share of participants has fallen drastically since the early years. While as late as 2016 some 4 out of 5 investors were Chinese, that proportion has hovered around 30% over the last year. Brazilians, meanwhile, are continuing their steady rise and account for 17% of applicants in 2019.

The proportion of applicants that choose the capital transfer option over real estate investment fell to just 7.8% in August after having soared to an abnormally high 16% in the month prior (it usually hovers around 10%).

Based on the most recent data, Portugal looks to be in for a statistically normal year; annualized extrapolations would see the program raise EUR 830 million (compared to EUR 839 million in 2018) and welcome 1,385 new investors (1,409 last year) in 2019.

A great deal of attention is fixed on the outcome of the citizenship applications of the golden visa program’s first cohort of legal residents; the question centers on whether participants in the program may qualify for citizenship on the basis of having been present in the country for only the program’s minimum mandated 35 days. If it is the case that they do, the competitive advantage such an outcome would engender would tremendously boost the program’s popularity.

Early reports indicated this was the case, although later reports appeared to contradict this.

If you want to know more about the Portuguese Golden Visa, you’ll find recent articles, statistics, official links, and more on its Program Page. If you wish to see a list of the hundreds of companies that can assist with applications to the program, visit the Residence and Citizenship by Investment Company Directory.