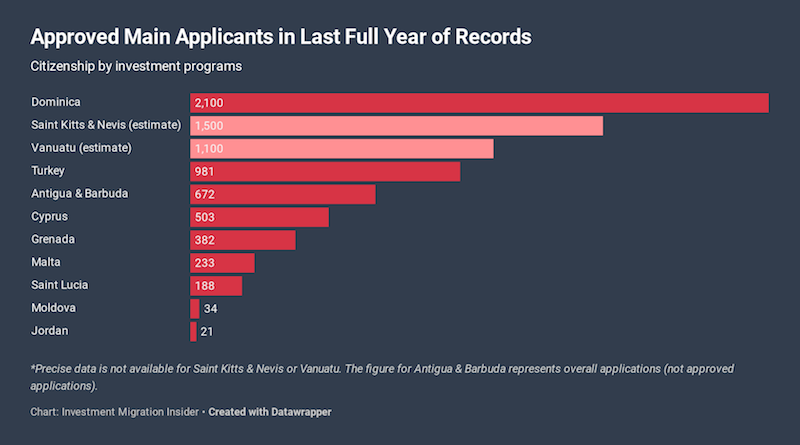 Speaking exclusively to IMI, Emmanuel Nanthan, head of the Dominica Citizenship by Investment Unit (CIU), has revealed that 2,100 applications to his country’s citizenship by investment program (CIP) received approvals in the 12 months between July 1st, 2018 and June 30th, 2019.

The number represents the highest application approval figure officially recorded in a single year among all citizenship by investment programs, although the Saint Kitts & Nevis CIP – whose administration invariably declines to disclose precise annual data on grounds that it considers such information a trade secret – may have rivaled Dominca’s achievement. Certainly, on a cumulative basis, Saint Kitts & Nevis is the clear leader. Since opening in 1984, close to 20,000 individuals have received citizenships in the country through its CIP.

Mr. Nanthan chalks the record numbers up to efficient handling of applications. Processing most of its applications using offshore facilities famously enabled the CIU’s work to continue uninterrupted through the deadly hurricanes that struck the island twice in quick succession in 2017.

Sam Raphael, developer of the Jungle Bay Villas Eco Resort that recently completed the construction of its first phase, believes confidence in the program’s investment – rather than donation – option is partly creditable for the CIPs relative popularity.

“Dominica is unique in that there are a number of highly visible, tangible ‘national development’ initiates that CBI investors are pleased to contribute to,” Raphael points out. “These initiatives include low-income housing, a new geothermal energy plant and a number of other CBI funded infrastructure projects. Dominica also offers some of the best CBI real estate in the Caribbean,” he concludes.

Mr. Raphael’s claim is not without merit. While a great deal of controversy has arisen in recent years – notably in Saint Kitts and Antigua – over the tendency of CBI real estate projects to go unfinished for long periods or never being built at all (sometimes, many suspect, by design), Dominica has an enviable track record in the Caribbean.

Data from CBI Real Estate Watch indicates that while construction has been completed or partly completed on only one in three approved projects in Saint Kitts & Nevis, Antigua & Barbuda, and Grenada – each of which has several projects either on hold or not started – that ratio is 50% in Dominica.

To be fair, the country only has six approved developments, while Saint Kitts & Nevis has close to a hundred and Antigua & Barbuda about half that. But it may be precisely the low number of approved developments – and the country’s selectiveness about whom it trusts with such approvals – that has allowed Dominica to avoid much of the real estate related fracas that has plagued its neighbors.