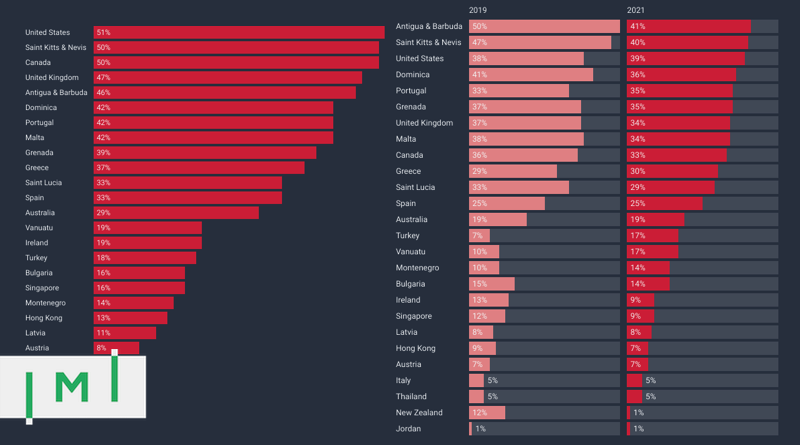 In 2019, we analyzed the database of the RCBI Company Directory to understand which investment migration programs are the most commonly offered among firms globally.

Since then, the number of companies registered in our database has more than tripled in size, from just over 300 to just under 1,000 today. That considerable expansion of the sample size warrants another look at which program destination countries feature the most frequently on RCBI company shelves.

For the purposes of this analysis, we have considered only those firms that have listed investment migration as the main focus of their business. In other words, firms like Deloitte or Sovereign Group, while they do offer investment migration as part of their panoply of services, are not included. This reduced the number of firms under consideration from 991 to 585.

Note: If your firm is not yet listed in the RCBI Company Directory, you can register here. It’s completely free.

Antigua & Barbuda’s CIP tops the list once more this year, though its relative share has shrunk from precisely half of all companies to 41% today. Saint Kitts & Nevis remains the runner-up but has also seen its share drop from 47% of companies to 40%.

The United States (all residency programs) has supplanted Dominica at the third spot on the list, while Portugal has pushed Malta (all programs) out of the Top 5.

Turkey’s CIP saw the greatest relative improvement (in terms of percentage points) during the period: While only 7% of firms in the database offered this program to their clients in 2019, 17% do so today. The sharpest reduction was observed for investment migration programs in New Zealand, which were promoted by 12% in 2019 but only 1% today. New Zealand also saw a reduction in the absolute number of firms that offer it.

To adjust for the possibility that small, one-program firms might skew the rankings, we also looked in isolation at the program offering of relatively larger firms - here defined as having 20 or more employees - because they are more likely to offer a diversified portfolio of programs and, thereby, provide more representative grounds for comparison. Considering large firms alone reduces the sample size to 171.

The larger-firms segment paints a different picture of which programs are the most widely promoted.