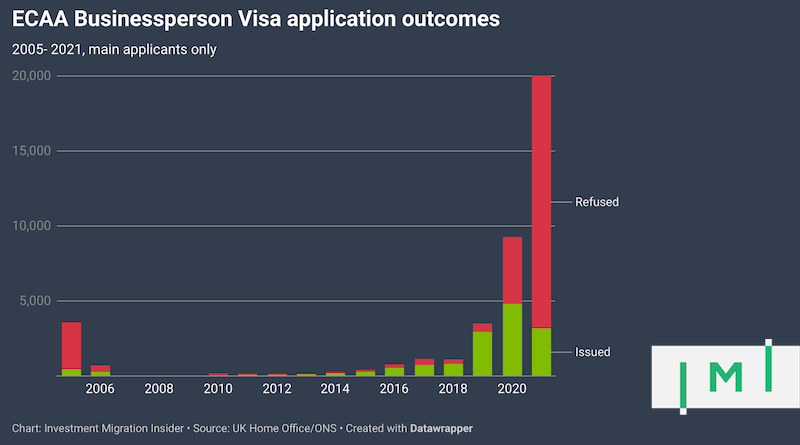 As it became clear that the UK would not extend the program beyond the Brexit transition period that ended on December 31st 2020, tens of thousands of Turks rushed to apply for the ECAA Turkish Businessperson Visa, a special avenue for UK immigration afforded exclusively to Turkish nationals. The overwhelming majority of them were refused.

In the decade prior to Brexit, rejection rates for what was a relatively little-used program had fallen steadily, bottoming out at 16% in 2019, a year in which a record 2,943 such visas received approvals. While approvals reached another all-time high of 4,785 in 2020, however, refusal rates suddenly spiked that year, as the Home Office rejected nearly half of all applicants.

Last week, the Office of National Statistics released data demonstrating a remarkable turn of events for ECAA applicants in the first half of 2021: Not only was the Home Office still processing new ECAA applications (not extensions) fully two quarters after the program had officially ended; it shattered records both in terms of applications processed and rejected.

While it's true that rejection rates for the visa have been even higher in the past (peaking at 89% in 2008), that took place in the context of far lower application volumes; only 19 applications were lodged in 2008.

Has the quality of applications really deteriorated so significantly in 2021 that this alone would explain the quintupling of rejection rates between today and 18 months ago? Considering the size of the sample (some 32,000 applications received during the period in question) and assuming a normal distribution in application quality, a sudden degradation appears an unlikely explanation.

"A colleague of mine working for the Home Office told me back in November 2020 that they had started to receive almost a thousand applications a day."

That would explain why the Home Office is still processing applications well into 2021, but not why the rate of rejections would be rising.

While the stated UK government policy is to allow extensions of the leaves-to-remain (LRs) of those Turks who were in the country on a valid ECAA visa before 2021, it has not accepted any new ECAA visa applications since last year's cut-off date. 100% of the applications on which the Home Office has made decisions in 2021, therefore, were lodged in 2020 or earlier, a period in which the UK was still obliged by its 1963 Ankara Agreement commitments to, if not approve ECAA applications, at least take receipt of them.

That the UK has no particular plans to open a similar program for Turks in the future might indicate that the reason the Home Office has been accepting ECAA visas in the past was not that Downing Street necessarily wanted tens of thousands of Turkish businesspeople to relocate to the UK but, rather, that Downing Street wished to honor agreements it made decades ago.

Cynics might hypothesize that the UK, now definitively divorced from the EU and no longer bound by that union's multilateral agreements, is only perfunctorily abiding by its prior commitments to welcome Turkish businesspeople; not outright dropping the ECAA visa, but not incentivized to approve more of them than it strictly needs to either.