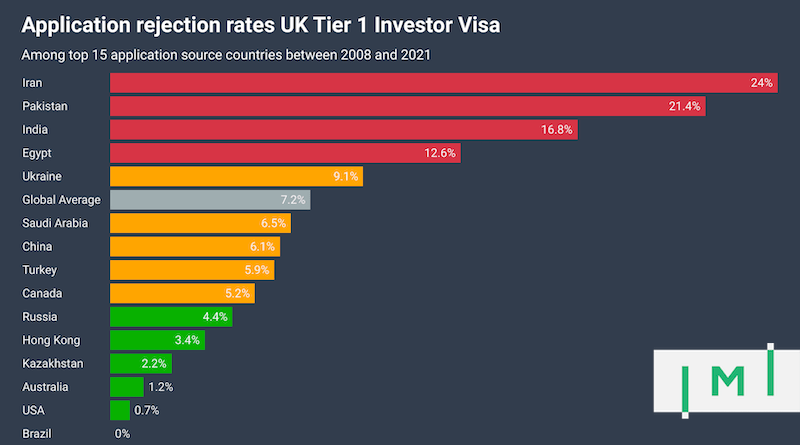 All three of the UK’s investment-based visa programs saw year-on-year growth in approvals in 2021, figures from the Office of National Statistics this week show.

The UK Investor Visa program – which Home Secretary Priti Patel earlier this week summarily canceled without warning, eliciting accusations of “undermining democratic procedures” and of worrying more about “optics and politics” than what’s best for the UK economy – issued 300 investor visas to main applicants in 2021, a 39% increase compared to 2020.

The figures imply the program helped raise direct investments for the UK to the tune of - at a bare minimum - GBP 600 million in 2021, though the true figure is more likely closer to GBP 1 billion because of the fast tracks available to those investing GBP 5 and GBP 10 million.

About a third of investors approved in the year's final quarter were Chinese. 9% were Russian, 6% American, and 4.5% Hongkongers. Note, however, that the Russian contingent has shrunk considerably in recent years, typically accounting for a double-digit share of approvals in each quarter prior to 2018, and rarely accounting for more than a single-digit proportion since.

The Q4 nationality distribution largely mirrors the historical pattern: Over the program's 13-year history, a third of approved applicants have been Chinese, 18% Russian, 6% American, and 5% Hongkongers.

Rejection rates have varied markedly between nationalities throughout the program's life. While one in four Irani and one in five Pakistani applicants have been turned away, 100% of Brazil's 82 applicants, and all but two of the United States' 277 applicants, have been approved.

Overall, rejection rates have been considerably lower in the program's later years, possibly thanks to improvements in UK banks' due diligence - the first layer of screening for Investor Visa applicants.

The UK's Startup and Innovator visas, which - now that the Investor Visa has been axed - remain the only routes to investment-based visas in the UK, both logged record years in 2021. To be fair, 2021 was only these programs' second full year of operations, but the trend is heartening nonetheless.

The Startup visa program saw an even greater year-on-year improvement in 2021, recording 507 approved main applicants, a 56% improvement on the 325 approvals seen in 2021.

As with the Innovator Visa, Indian and Chinese applicants dominate, respectively making up 20% and 13% of approved applicants.