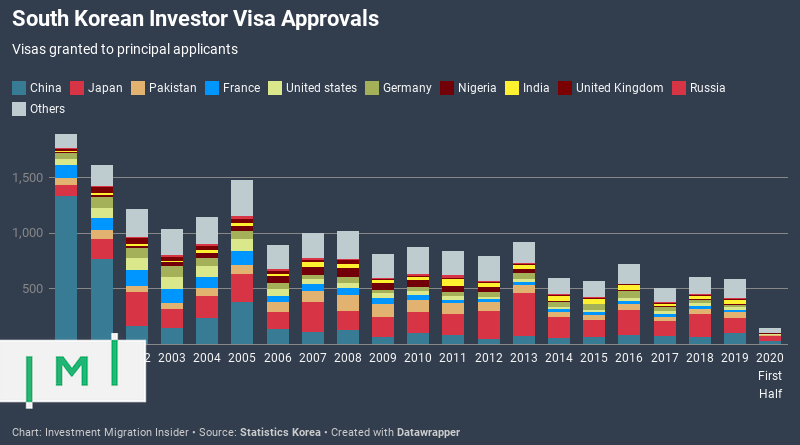 If you’re an investment migration practitioner who doesn’t know much about the South Korean investor visa, you’re not alone. Despite issuing an average of nearly 600 investor visas a year for the last five years, South Korea’s program gets very little attention in the market.

That’s partly because industry professionals tend to focus on South Korea as an outbound market, and partly because the minimum investment amounts don’t offer as many mobility and settlement advantages as similarly priced competing programs in Europe and North America. A residence permit in a European country permits 180 days of visa-free, intra-Schengen travel a year and also (in many cases) offers a clear path to eventual citizenship. Residency programs in the US or Canada, meanwhile, also offer a path to citizenship and mobility access within very large physical territories (and markets). A residence permit in South Korea, on the other hand, gives the investor the right to travel to and settle in South Korea alone and nowhere else.

Nonetheless, a South Korean investor visa should not be entirely absent from the HNWI advisor’s program portfolio because the country does offer a number of salient advantages to the right subset of investors:

For many Chinese and Vietnamese clients, for example, South Korea’s investor visa is an attractive proposition. It therefore behooves any investment migration professional worth his salt to possess at least a cursory knowledge of the program.

The South Korean investor visa at a glance
The capital requirements for investment-based residence permits in South Korea range from US$90,000 to US$630,000, depending on where in the country the investment is made, as well as on whether the investment is of an active or passive nature. Initial visas are issued with a validity period of either two (for active investors) or five years (real estate and public business investors). Permanent residence permits are available after five years.

Below, we have reprinted the Investment Migration Council helpful overview of the various investment-based routes available to prospective residents of South Korea:

1. Working at a Foreign Investment Company
Applicant who is considered as an indispensable skilled worker planning to engage in management, administration, production or technology of an existing or a new Korean foreign investment corporation.

The applicant must have at least 10% of the total capital stocks of the company, voting right, or they must sign a contract dispatching and appointing executives by having some stock shares. The visa is issued for 5 years under this investment option.

2. Venture Business
Applicant who has established a venture business in the field of advanced technology in Korea. The visa is issued for 2 years under this investment option.

The investment must be at least 10% of the total investment capitals of the company, and the applicant must be registered as the co-founder with the other Korean CEO on the business registration certificate.

The visa is issued for 2 years under this investment option.

Option 2: Immigrant Investor Scheme for Real Estate
Applicants who invest at least KRW 500 million (USD 450 000) in a real estate can acquire permanent residence under the Immigrant Investor Scheme for Real Estate (IISRE). Depending on the region, the required investment is between KRW 500 million – 700 million. Initially, F-2 visa is issued to the applicant. Permanent residency (F-5 visa) is granted if the investor maintains their investment for minimum of 5 years.

Dependents can be included.

A. Principal Guaranteed Investment
The investment is deposited into a public fund, managed by the Korea Finance Corporation which lends loans to smaller Korean businesses at low interest rates.

B. Risk-based Investment
This option requires more than the minimum investment requirement (KRW 500 million) which is invested in a development project of a less developed region notified by the Ministry of Justice.

Access to permanent residency (F-5 visa) if the investments are maintained for 5 years.

Path to South Korean citizenship
A common complaint about Asia’s residence by investment programs is that, unlike in Europe or North America, authorities typically display extreme reluctance in granting citizenship to those who are not ethnically native. South Korea, in this respect, is an exception.

“It is possible to become a naturalized citizen of South Korea if you maintain actual residence here,” says Hyong-Jin Kwon. “There are three paths to citizenship through naturalization, but the most typical for a foreigner is “general naturalization”.

This path, he explains, require continuous physical residence in South Korea for five consecutive years, general knowledge of Korean culture, and the ability to speak basic Korean. In other words, not materially different from similar naturalization requirements in investment migration hotspots like Portugal, the UK, the US, or Canada.

“While there are always cracks in the system in these cases,” Kwon continues, “South Korea isn’t some corrupt banana republic where you can pay the immigration official five thousand won and get by with no knowledge of Korean.”

Program trends
For the last 21 years, the two largest applicant groups have been the Chinese and the Japanese, each accounting for about one-fifth of the total number of visas. Pakistan (8% of the total), Nigeria (3.6%), and India (3.2%) have also been significant sources of investor migrants in South Korea but, more remarkably, four of the top ten applicant source countries are Western ones; German, French, American, and British applicants make up a combined 20% of the aggregate.

Like virtually every other investment migration program in the world (the notable exception is Thailand’s Elite Visa), South Korea’s investor visa approval volume saw a sharp decline for 2020. The most recent figures available, which cover the first half of 2020, show only 145 main applicants had been approved by the start of July. Even if South Korea was able to maintain that momentum during the second half of the year (unlikely), the drop in approvals from last year would amount to a 51% reduction compared to 2019.

But the ebbing trend in investment migration to the Land of the Morning Calm far predates the pandemic; the program has been on a sustained downward trajectory for as far back as records go, peaking in the year 2000 (the first year for which data are available) at 1,891 main applicants, seven in ten of whom were Chinese nationals.

Why the steady decline?
The primary cause for the continued fall in applications are the periodic upward adjustments of the price of entry.

The only two truly passive investment categories, real estate and “public business”, were only instituted in 2010 and 2012, respectively. Prior to that, the Investor Visa program, known as the D-8 residency permit, included only the Corporate/Foreign investor visa, which has three separate investment options, all of which require hands-on involvement in the business. Prior to 2010, the mandated minimum investment for this active-investment option was KRW 50 million (about US$45,000).

With the introduction of the new passive investment route in 2010, the Korean government decided to double the minimum capital threshold for the active routes to US$90,000, though this appears not to have had any immediately dramatic effect on application numbers.

“Getting an investor visa for South Korea used to be easy,” says Hyong-Jin Kwon of CitiNavi, an investment migration consultancy, on his company’s website. “Not that many years ago, it was possible to come in with as little as KRW 25 million (US$22,000), claim to set up a business, withdraw the money, and live in South Korea indefinitely.”

Eventually, he says, the authorities “wised up” and doubled the minimum investment requirements twice, in quick succession.