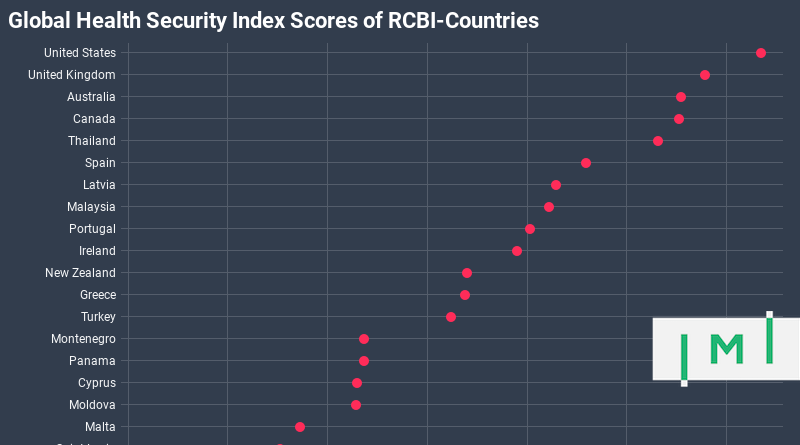 The COVID-19 outbreak has put health security front and center among the concerns of Asian investor migrants. How does your RCBI-country stack up in the Global Health Security Index?

According to its creators, “the Global Health Security (GHS) Index is the first comprehensive assessment and benchmarking of health security and related capabilities across the 195 countries that make up the States Parties to the International Health Regulations (IHR [2005]). The GHS Index is a project of the Nuclear Threat Initiative (NTI) and the Johns Hopkins Center for Health Security (JHU) and was developed with The Economist Intelligence Unit (EIU).”

What does the GHS index measure?
The GHS index rates countries on six metrics and 140 sub-metrics aimed at determining a state’s capacity to prevent, detect, and rapidly respond to public health emergencies such as a viral outbreak. The six main categories are:

How does it relate to residence and citizenship by investment?
Investor migrants, particularly those nearing retirement, have always listed healthcare infrastructure as among the deciding factors when choosing among programs, alongside criteria like education, tax-levels, and mobility.

“Until now, healthcare and medical systems have been a top-five priority for Chinese cross-border real estate buyers,” says Juwai IQI Executive Chairman Georg Chmiel in his company’s report on the Coronavirus’ effect on cross-border real estate investment. “Healthcare has been especially important for retirees. That is one reason Thailand is so popular with Chinese retirees.”

The emergence of the deadly COVID-19, however, have made health-security questions even more pressing than before, and an RCBI-jurisdiction’s GHS-score (or, at least, the country’s perceived level of health security) is likely to become an increasingly prominent vector in the global investment migration market.

“After the epidemic, we expect healthcare to be even more important to buyers. Countries like Thailand, the US, the UK, Canada, and Australia, which have good healthcare systems and highly ranked abilities to react to viral outbreaks, are likely to benefit from an increase in buyer activity,” Chmiel adds.

RCBI-country ranking on GHS
Anglosphere-countries do exceedingly well on the index; the United States tops the ranking (not only among RCBI-countries but also overall), followed by the UK, Australia, and Canada. Among the top 20 countries in the GHS-ranking, 15 are in Europe, two in North America, and three in Asia. Thailand clocks in at an impressive 6th in the overall global ranking, ahead of all the Scandinavian countries.

“Surprisingly, some countries that are very popular with Chinese buyers and are generally considered to have good healthcare systems rank relatively low for health security,” Chmiel points out. Cyprus and Malta, for example, get scores of – respectively – 43 and 37.3, placing them 77th and 98th in the world. Places like Zimbabwe, Nigeria, and Sierra Leone all score higher than Malta in the GHS index. The Caribbean CIP-countries, as well as Vanuatu, rank the lowest, with only Saint Lucia scoring more than 30 points.

This isn’t to say that healthcare is any worse in these countries; it merely means they haven’t the infrastructure in place to deal with a major public health crisis, partly because of their small populations. Note that the GHS Index includes “indicators of nations’ capacities and capabilities to reduce Global Catastrophic Biological Risks (GCBRs), which are biological risks of unprecedented scale that could cause severe damage to human civilization at a global level, potentially undermining civilization’s long-term potential.” Naturally, a smaller country – ceteris paribus – will have a much lower capacity to reduce the global impact of any given disease, simply due to its size.

RCBI-demand, once released from the clutches of COVID-19, will come roaring back
IMI has long held that the investment migration industry is a so-called antifragile business (see: Investment Migration Is an Anti-Fragile Industry) because we are in the enviable position of actually gaining from disorder, rather than being weakened by it. It may sound cynical, but natural disasters, political crises, armed conflict, and economic depressions don’t actually harm demand for investment migration; rather, the opposite.

Several RCBI-specialist firms with whom IMI has been in touch confirm that phones are now ringing non-stop at their Asia-based offices, while estate acquisitions, for the moment, are drastically reduced.

“In several real estate markets, we already see the negative impacts of the epidemic,” Georg Chmiel confirms. “Many people have stopped traveling and are limiting their public activities. As a result, in real estate markets around the world where Chinese buyers are usually active, we see a reduction in the in-person presence of Chinese buyers at auctions, a similar decrease at inspections and open houses, and the stalling between contract signing and final settlement of some transactions involving Chinese buyers.”

But while the viral outbreak is preventing investors from visiting their properties, signing deeds, and attending oath swearing ceremonies, it is simultaneously driving fence-sitters to take action by beginning the investment process, one that many will complete once they feel safe to leave their homes (to say nothing of traveling internationally).

Georg Chmiel continues: “The world is still uncertain when humanity will bring the Coronavirus under control. When that happens, the pent-up activity may result in an unusually large number of transactions over one or two quarters, as buyers complete delayed transactions.”

If you want to know more about the GHS and its methodology, visit the official website here.