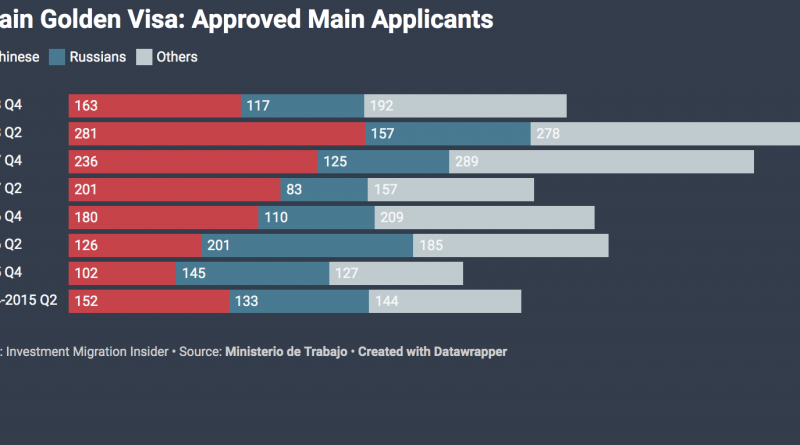 Following a record-setting second first six months of 2018, which saw Spain approve 716 main applicants for its golden visa program, approval numbers slumped in the latter half of the year, figures from the Ministry of Labor show.

Spanish authorities approved 472 applications during the period, of which Chinese and Russian investors – invariably the largest applicant groups – accounted for 163 and 117, respectively. While the fall in approvals represents a 34% drop overall, the steepest decline was among the Chinese applicants, which saw a 41% slump compared to the preceding six-month period.

As the Spanish ministry of Labor publishes very limited statistics about the program, we know from previously released figures that golden visa applicants who invest in property – about 94% of the total – spent an average of 743,000 euros on their acquisitions between 2013 and 2017. Presuming similar average amounts in 2018, Spain raised around 350 million euros in the second half of 2018, compared to about 530 million euros in the first half of the year, only counting real estate investment.

Hundreds of companies can assist with applications to the Spanish Golden Visa program. To see which ones, visit the Residence and Citizenship by Investment Company Directory.

Since the program’s launch in 2013, a total of 4,093 main applicants have received Spanish Golden Visas. Of those, 1,441 (35%) were Chinese, while 1,071 (26%) were Russian. Presuming real estate investors still make up 94% of participants, the aggregate value of property acquisitions under the golden visa’s auspices during the program’s lifetime is now close to three billion euros.

That figure, while momentous, is still considerably lower than that attracted by Spain’s Iberian neighbor, the Portuguese Golden Visa, which, at last count, had raised investments exceeding EUR 4.5 billion, 90% of which came in the form of property purchases.