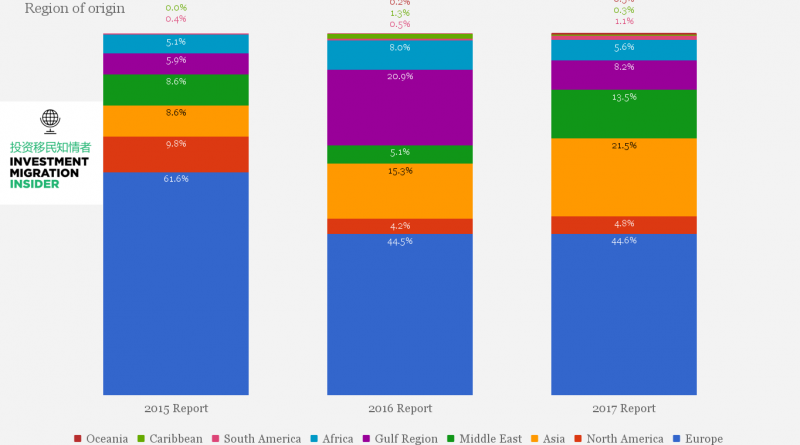 The Office of the Regulator for the Individual Investor Programme (ORiip) today released its fourth annual report containing a variety of statistical data related to Malta’s citizenship by investment program, the MIIP, for the 12-month period between July 1st, 2016 and June 30th this year.

The data reveal that while interest in the program remains robust, the number of applications submitted in the period fell from the 451 recorded last year to 377, a decrease of some 17%.

Still the largest source of applicants, the share of Europeans (chiefly Russians and Ukrainians) applying to the program remained stable at 44.5%, virtually unchanged since last year, while the proportion of applicants hailing from Asia is up markedly since last year (15.3%) to 21.5%.

Nationals of the Gulf Region, Africa, and North America accounted for 8.2%, 5.6%, and 4.8% of applications, respectively.

The figures also showed a drastic increase in the number of investors receiving their Maltese citizenship, as 386 main applicants – as well as 1,023 dependents – were naturalized during the period, up from 137 last year. The sharp rise in naturalizations can be attributed to the 18-month lead time usually required to reach the final stage.

The 386 additional Maltese citizens bring the total number of naturalizations completed under the program since inception to 566 main applicants and about three times as many dependents. The Malta IIP has a cap of 1,800 naturalizations (excluding dependents), which means a third of the spots have been filled so far.

Of note is that the fairer sex appears to be in the ascendancy among main applicants. While females made up only 8% of main applicants in the period July 2014 to June 2015 (the first year such data was reported), their representation grew to 12% a year later and has now reached a full 21% of the total. This rise has coincided with the surge in interest from the Chinese, who commonly have a higher share of female main applicants for residence and citizenship by investment programs around the world, particularly for programs with residence requirements.

Of the 377 submitted applications, 83 were either rejected or withdrawn, a figure that’s up from the 52 recorded during the same period last year.