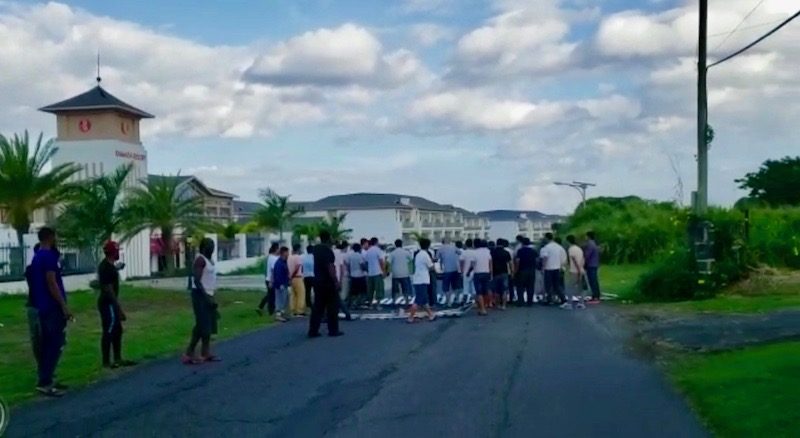 A video recorded by a passer-by shows what eye-witnesses say are workers at the Ramada Resort CBI-project in Saint Kitts protesting and blocking the road that runs past the resort. The protesters reportedly told onlookers they were on strike over non-payment.

To confirm whether non-payment was, in fact, the motive for the protest, IMI contacted representatives of Galaxy, the project’s developer, on Thursday to request clarification on the matter. Galaxy has so far declined to comment.

Kamal Shehada, a key investor in competing CBI-developer Range Developments, famously took Galaxy to task in March, calling their promise to open by September 2019 “incredible” and, in a public letter, offered to bet Galaxy EC$5 million that they would not open the resort by the promised date. Galaxy turned down the offer, which, as it turns out, was a prudent move considering 2020 is but days away and the resort has yet to open.

Veteran Saint Kitts politician, radio personality, and activist Dwyer Astaphan has been an outspoken critic of Galaxy’s failure to complete on time, as well as what he claims are frequent labor law infractions. Speaking to IMI about the video, Astaphan indicates the event brings up long-standing questions about the development.

Astaphan asks, “what prompted the protest? Is Galaxy unable to pay its workers? How does this impact the completion of works? Why has the opening of the resort taken so long?”

The Chinese workers, he says, “are brave to protest, but they’ve made a mistake by blocking the public highway. This incident could have flared up into violence”. Astaphan comments that he’s concerned also about other CBI-projects on the island, many of which remain unfinished. “Will this leave a bunch of white elephants on our landscape?”.

The concern is not without merit; an analysis from CBI Real Estate Watch earlier this year revealed only 51 out of 160 Caribbean CBI-projects had been completed.