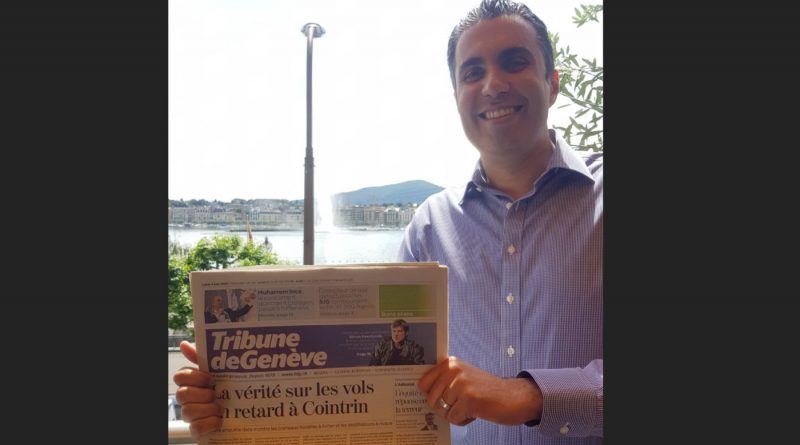 Yesterday, a news outlet based in the Caribbean published a story claiming Mohammed Asaria – founder of Range Developments, the developer of Park Hyatt Saint Kitts, the Cabrits Resort in Dominica, as well as the Six Senses Saint Kitts – had been arrested and detained in China on suspicion of illegal fundraising. Range Developments have vigorously rejected the story, provided photographic evidence to disprove the false claims, and promised to pursue “the highest possible damages” in court.

Upon request from Investment Migration Insider, Mr. Asaria has kindly provided photographic evidence to prove that he is, in fact, in Geneva, and not in a Chinese jail.

A statement on the subject from Range Developments reads as follows:

Last night fake news began to emerge from Monserrat and St Lucia concerning Mohammed Asaria, the founder of Range Developments, which developed the Park Hyatt in Saint Kitts and Nevis and is building the Cabrits Resort, Kempinski and the Six Senses St Kitts. There is no truth whatsoever in these allegations that Mr Mohammed Asaria has been arrested and detained in China. Mr Asaria is actually in Geneva, Switzerland, presenting at the Investment Migration Council’s conference.

Suggestions that Mr Asaria and/or Range have been engaged in fraudulent and illegal activities are incorrect and vigorously rejected. It is obvious that the purpose of these articles is solely to damage Mr. Asaria’s and Range’s reputation among investors. The company’s lawyers are insisting on an immediate retraction and the highest possible damages.

“I wouldn’t like to speculate who is making these ridiculous allegations or what their purpose is,” said Mr Asaria. “They have no foundation whatsoever. Our focus is on the completion of the Cabrits Resort Kempinski, Dominica and the commencement of the Six Senses St. Kitts.”

The allegation first surfaced on a website called MNI Alive: Global Caribbean Media, and have been picked up by other media, including NewsAmericaNow and Jamaica Inquirer. While speaking at a conference in China last week, Mr Asaria was targeted by a number of protesters. When he sat down to listen to their grievances, it turned out they were baseless and rebutted by Range immediately with evidence, and the protestors had just been paid to make trouble.

“It seems this is one of the challenges of being a successful developer,” said Mr Asaria. “I won’t let this distract from our efforts to build world-class projects in the Caribbean.”

While Range did not wish to speculate as to the culprit, avid industry observers have hypothesized, on condition of anonymity, that the fake story may be a ploy orchestrated by a competing development company seeking to discredit Range, possibly in retaliation to Asaria’s recent public criticisms of certain CBI-projects. At present, this hypothesis remains purely speculative and there is no evidence to indicate who the unnamed source of the false story is.