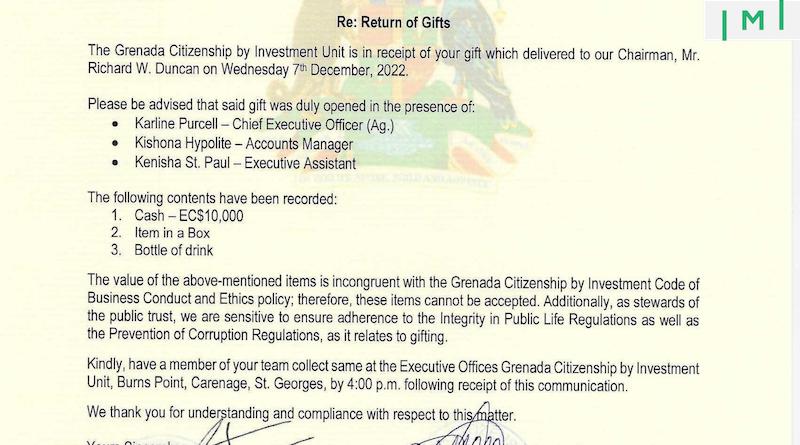 In a letter dated December 13th (reprinted below) and shared with IMI only yesterday, Grenada’s Citizenship by Investment Unit (CIU) addresses Mr. Bob Xu, CEO of Hartman Hotel Development Ltd – the company behind the under-construction, CBI-approved Hartman University Town & Resort project – informing him that the CIU was in receipt of a gift from Mr. Xu to the Chairman of Grenada’s Citizenship by Investment Committee, Mr. Richard W. Duncan.

Sensitive to the potential ethical consequences of accepting gifts from program stakeholders over which he wields direct influence as Chairman of the CBI Committee, Mr. Duncan prudently opted not to open it on his own but, instead, to invite three colleagues from the CIU – the Unit’s CEO, Accounts Manager, and Executive Assistant – to bear witness to the unveiling of the contents of the package. They found that it contained a bottle of “drink” (presumably alcoholic), an “item in a box”, and EC$10,000 (some US$3,700) in cash.

In their letter to Mr. Xu, the Unit CEO and CBI Committee Chairman explain that they cannot accept the gift as its value “is incongruent with the Grenada Citizenship by Investment Unit Code of Business Conduct and Ethics policy” and that, moreover, “as stewards of the public trust” they were sensitive to ensure adherence to graft-prevention rules.

Upon receipt of a copy of the letter, IMI immediately reached out to Bob Xu to ask for an explanation of the purpose of the package.

“This happened more than two weeks ago,” Mr. Xu told IMI in a text message. “After I received the letter, we took back the gift, and I sent an email to the Unit explaining it that same week.”

Questioned as to what had prompted the gift in the first instance, Xu responded that it was a question of cultural differences that had led to a misunderstanding.

“You know we give red envelopes (红包) on the occasion of the new year in Hong Kong,” he explained. “Afterward, I was told that the Unit could not accept gifts with a value exceeding EC$300. So, now I know.”

A number of separate sources have forwarded to IMI the CIU’s letter to Mr. Xu in the last 24 hours, several suggesting the gift hinted at bribery. While that may have been the case, the explanation could also be less dramatic and more indicative of Mr. Xu’s cultural maladroitness; he should have known that any gift to a public official with direct influence over his business, especially one containing actual cash, would cause – at best – an embarrassing situation.