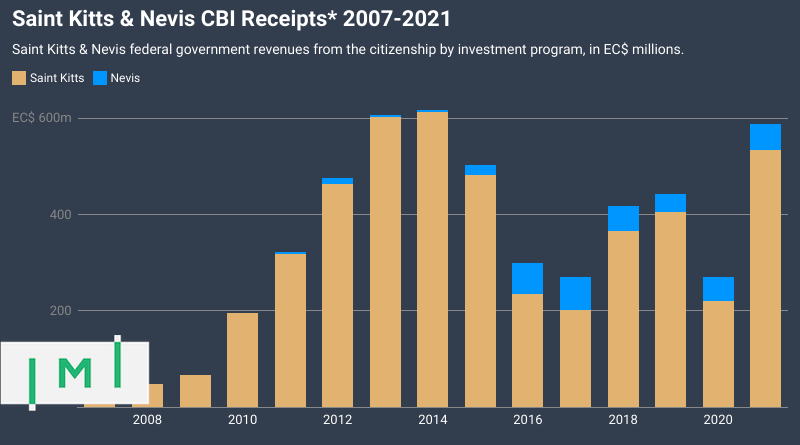 During his monthly press conference last week, Premier of Nevis, Mark A.G. Brantley, disclosed that the Basseterre government had received some EC$ 5.15 billion (approx. US$1.9 billion) from the Federation’s jointly operated citizenship by investment program over the last 15 years, and expressed dismay at his island’s disproportionately small share of the same.

For the last decade, annual receipts from Saint Kitts & Nevis’ Citizenship by Investment Program have averaged about EC$412 million, according to Premier Brantly, who – unable to obtain official figures – formed a team of researchers to pour over audited Sugar Industry Diversification Fund (SIDF) reports and budget statements to, in his words, “ferret out” the information.

Local news outlets have devoted considerable coverage lately to an ongoing debate about the equitable distribution of CBI funds between the two islands. In 2015, the support of Brantley’s Concerned Citizens Movement was instrumental in securing the electoral victory of Prime Minister Harris’ Team Unity government. The promise of a share in CBI revenues for Nevis, proportional to its population (about a quarter of the Federation live on the smaller island), was “a principal basis” of his party’s support at the time, Brantley pointed out in his press conference last week. The proportional sharing of CBI revenues was agreed to in writing in the so-called Charlestown Accord, a document signed by PM Harris, Shawn Richards of the People’s Action Movement, and then-leader of the Concerned Citizens Movement, Vance Amory (who passed away this Saturday).

“It was not a secret document,” said Premier Brantley during his address. “It was signed on the courthouse steps in Charlestown before a massive crowd, as I like to say, before God and man, somewhere in December I believe [December 14th, 2014]. Signed, documented, the Charlestown Accord did not speak to revenue that comes to Saint Kitts & Nevis. The Charlestown Accord spoke to the political issue that was current at that time, and that issue was CBI proceeds. In fact, the Charlestown Accord was very specific. It mentioned CBI Revenue, CBI proceeds; not general revenue, not tax revenue.”

Interested readers may find the details of the Charlestown accord here.

It is this accord that Premier Brantley claims the Basseterre government is not upholding. If the numbers he presented during his press conference are correct, they are evidence that Brantley’s grievance is not unfounded.

“I have been very concerned,” said the Premier about the difficulty of obtaining the data, “that those who are the keepers of the numbers, those who have the numbers at their fingertips, continue, time after time and speech after speech, and statement after statement to say to the people of the country ‘look how much Nevis is getting’. You, the members of the press, you have archives, you have all kinds of tools available to you. And I challenge any of you to tell us: Has it ever been said how much money the program has brought in? Never.”

Indeed, IMI’s own attempts to obtain statistical data from the Saint Kitts & Nevis CIP over the years have been unsuccessful.

Triangulating and synthesizing information from various public sources, Brantley’s team found that the program had raised a grand total of EC$5.15 billion since 2007, of which about EC$372 million (7.2% of the total) had found its way to Nevis, the smaller of the two islands that make up the Federation. In the pre-2015 years, moreover, most of the CBI-revenue passed on to Nevis came in the form of loans rather than grants, loans that came at considerable rates of interest at that.

The figures paint a highly illustrative picture of how various events have impacted the country's CBI inflows over the years. The 2006 program reform and standardization drove an almost immediate, sharp increase in revenues. That growth persisted until 2013 and 2014 when Grenada and Antigua & Barbuda newly opened CIPs began chipping away at a market Saint Kitts & Nevis had had more or less to itself until then.

Revenues fell further during the 2017 Hurricane season and ensuing "price war" in the Caribbean CBI market, before recovering significantly once more in 2018 and 2019. The pandemic's first year saw a sharp reduction in revenues but a strong rebound followed in 2021.