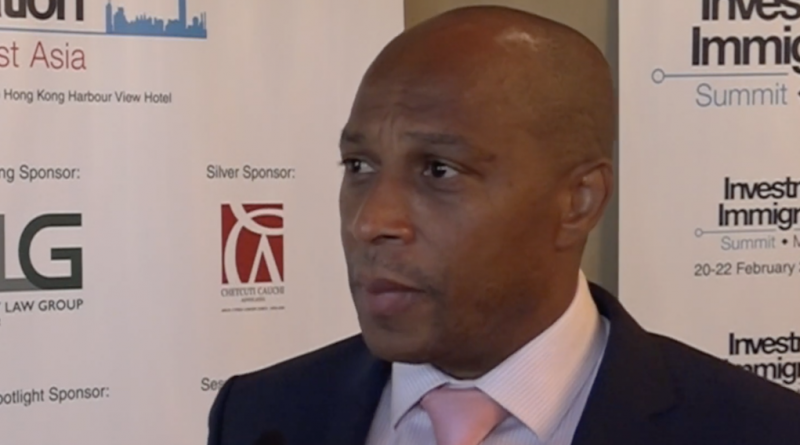 CIPA is a regional body made up of the CIU-heads of the Caribbean’s five citizenship by investment programs – Antigua & Barbuda, Dominica, Grenada, Saint Kitts & Nevis, and Saint Lucia – as a means to forge closer cooperation and coordination.

In a statement, CIPA clarifies that Alfred’s peers – the CEOs of the four other CIUs in the association – appointed him Chairman on January 31st – replacing erstwhile chairman Les Khan, who passes the baton after some 18 months at the head of the table. The chairmanship, Alfred tells IMI, has a one-year tenure.

As to why CIPA is only making the news public now, Alfred explains to IMI that certain formalities needed to be in place before the appointment could be finalized.

Sharing information will be “crucial”

The statement goes on to say that Alfred believes “there is no other body that can lead the charge in fostering and maintaining the integrity of the individual islands programs than this Association,” and that, during his chairmanship, he intends to “work towards seeing how the CIPs within the region can collaborate in several areas, such as the sharing of information” a matter he considers “crucial in moving forward”.

Alfred says it will be “very important for the Association to have a voice and be able to make its representation towards the myriad of issues which now confront the programs with the region”.

Speaking to IMI, Alfred gives hints as to what will be his first order of business.

“I am taking over the Chairmanship at a time when there is so much negativity surrounding the industry. The obvious questions is; what role can I play to turn this into a positive? My answer would be that, collectively as heads of the respective CIUs, we must work tirelessly in ensuring there is a sustained level of integrity within the programs; We must be prepared to share information; we must be prepared to talk honestly and openly and we must be prepared to speak with the policymakers in bringing about the right legislative changes,” says the new chairman, also expressing elation at the prospect of working more closely with his counterparts.

“I can safely say that I have the opportunity to work with some wonderful CIU-leaders”.

See also: Caribbean CIP “Race to the Bottom” – Is it Time to Form a Cartel?

Caribbean leaders, both in the and in the respective PM’s offices, have long extolled the virtues of and need for deeper regional integration and harmonization, both in terms of due diligence and pricing.

Initial steps saw some progress in this respect, but a flurry of deadly hurricanes in 2017 gave rise to derailments and setbacks for the multilateral approach. The nominal commitment to cooperation did not stand the test of tough times; in a CIP prisoner’s dilemma of sorts, hurricane season saw programs successively cut their prices to prevent a hemorrhaging of their applications to neighboring programs. Avowed proponents of harmonization quickly abandoned such lofty ideals when faced with a real threat to their own revenue streams.

In his efforts to further unify Caribbean CIP policy, Alfred has his work cut out for him and will have to extract tangible and binding commitments.

This time around, we’ll need more than just handshakes.