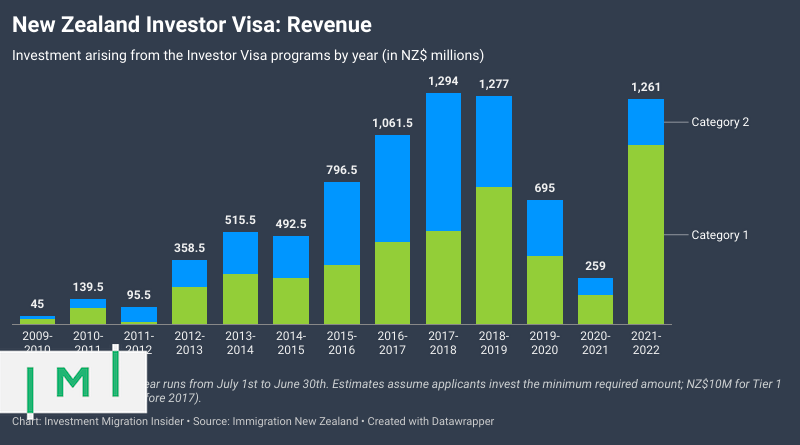 In terms of attracting capital from the truly wealthy, New Zealand – often referred to as a “billionaire bolthole” – has long punched well above its weight. Consider, as an illustration of the point, that the capital attraction performance of the New Zealand Investor Visa has routinely rivaled that of the recently-closed Tier 1 investor visa in the UK, a country that – after all – has 14 times the population of New Zealand.

Moreover, whereas the UK Investor Visa typically declined 4-8% of applications, the NZ$10m Category 1 segment of the NZ investor visa program is the most selective of its kind, commonly rejecting anywhere from one-third to half of all applicants. A 2020 analysis in IMI found that the program’s choosiness had led it to leave at least NZ$3 billion (US$1.9bn) on the table during its first 11 years of operation.

As observed on past occasions, however, New Zealand's exacting standards don't impact every investor nationality in equal measure. The spread between the most and least rejected nationalities amounts to an astonishing 33 percentage points. While New Zealand has historically rejected close to half of all South Africans, Indonesian applicants find themselves in a class of their own with an 88% approval rate.

Though it made New Zealand no less picky about its applicants, the pandemic struck the Investor Visa program harder than most; in FY2019-20, investment through the program fell by nearly half and dropped by a further 63% in 2020-21. Some of the world's strictest border closures prevented immigration officials from granting anything more than approvals-in-principle to those applicants not already present in New Zealand.

As recently as the beginning of FY2021-22, the outlook remained bleak. In the first quarter of the year, program authorities approved a mere five applications for both categories combined.

By the third quarter of FY2021-22, however, it was clear that a revival was underway as data showed 96 applications (for Category 1 and 2 in aggregate) had met with approvals. But it was the final quarter of this recently ended fiscal year that would unequivocally turn the ship around in the end: Across the two categories, 91 applicants were approved in the year's final three months alone, bringing the full-year total to 187 approvals.

The 100 UHNWI Category 1 investors alone injected - at the very least - NZ$1 billion into the Kiwi economy, while Category 2 investors (the merely rich) contributed at least NZ$261m. This marks the first time since the program opened that one of the two categories has single-handedly raised more than NZ$800m, let alone NZ$1 billion.

The 2021-22 results have brought program performance from nadir to zenith within a single year and the sharp final-quarter rebound bodes well for the fiscal year that's just begun.