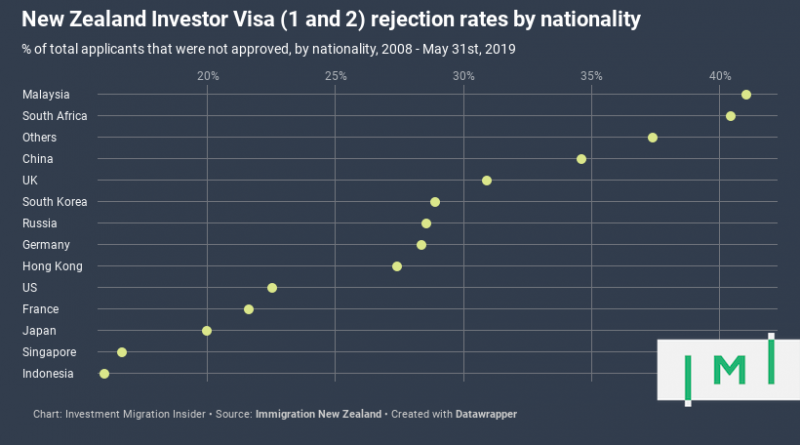 New Zealand’s investor visa, apart from having one of the world’s heftiest price tags, has long stood out for being the world’s decidedly most exclusive investment migration program; since its inception 11 years ago, the program has received altogether 3,252 applications, of which it has duly declined 1,066, fully one in every three applications.

Over the last year, it refused 26% of applications, although rejection rates are considerably lower for Category I applicants (25% since 2009) than for their peers in Category II (34%).

But while the variance between Category I and II is considerable, the spread between nationalities within those groups is even more pronounced; while only 16% of Indonesians and 17% of Singaporeans are turned away, New Zealand’s two investor visa programs declined the applications of 40% of South Africans and 41% of Malaysians.

The price of high standards
The minimum mandated investments for Categories I and II are NZ$10 million and NZ$3 million, respectively. In the fiscal year that ended on June 30th, 2020, New Zealand rejected eight Category I and 77 Category II applications, which – by extension – means it turned down NZ$311 million in this last year alone.

On a cumulative basis since 2009, however, the country has turned away no fewer than 121 Category I and 945 Category II applications. Prior to the 2017-18 fiscal year, the minimum investment for Category II was NZ$1.5 million, while Category I has always cost NZ$10 million.

The implication of those rejection numbers is that New Zealand, over the 11-year period, has foregone direct investments amounting to NZ$3.04 billion (some US$2bn, or about four consecutive years of economic activity in the Commonwealth of Dominica) because of its high rejection rates.

Want to know more about New Zealand’s investor visa program? To see recent articles, statistics, official links, and more, visit its Program Page. To see which companies can assist with applications to the program, visit the Residence & Citizenship by Investment Company Directory.