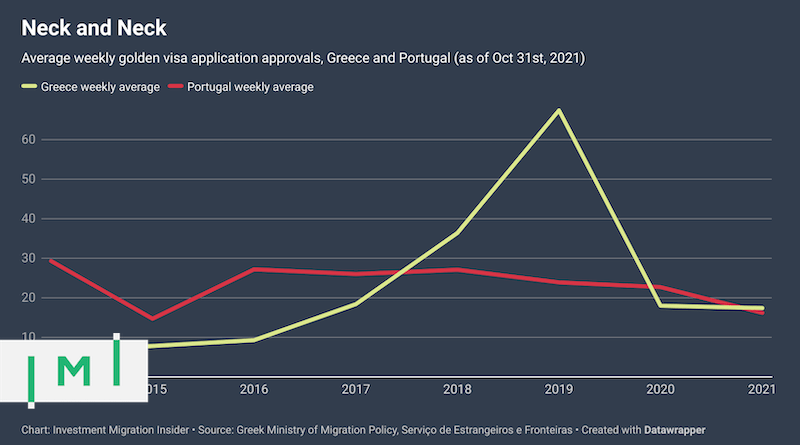 Digitally unprepared for COVID, Greece last year ceded the EU golden visa throne to Portugal. Now, the Greeks are back – with a vengeance.

Greek immigration authorities approved 193 main applicants and 1,078 of their family members for golden visas in the month of October, figures from Enterprise Greece this week show.

That makes the Greek golden visa Europe's most popular (again), and there is much to indicate the revival is still at an early stage. The 193 applications approved in October amounts to 48 approvals a week during the month, nearly twice the rate of 26 weekly approvals granted in the last reporting period, June 1st - September 30th (where Enterprise Greece has previously only published golden visa data 3-4 times a year, this latest update comes but a month after the last one).

Should Greece be able to continue processing at this pace, the program will see more than 1,100 main applicants receive golden visas in 2021. It also indicates that Greece will reach its 10,000th golden visa approval sometime in Q1 next year, a milestone Portugal's program reached this September.

About one quarter (50) of investors issued golden visas in October were Chinese nationals. Russians accounted for 27 approvals, Turks for 21, Lebanese 13, and Egyptians 13. Americans were the 7th biggest applicant nationality during the month, with six approvals. On a cumulative basis, since the program's beginning, Americans rank 9th overall, with 92 approvals. Most of these, tellingly, have been recorded in the last 18 months.

We continue to observe wide discrepancies in average family sizes; On average, a Ukrainian investor appends only 1.5 family members to his application, while the average Iraqi includes twice as many.