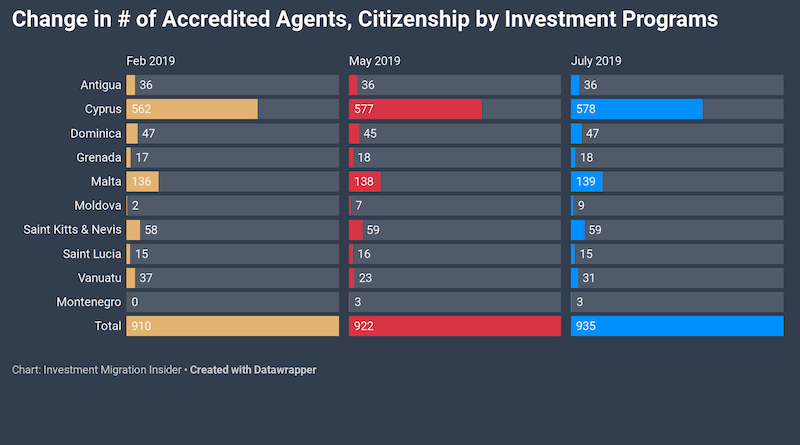 The number of accredited agents for citizenship by investment programs has grown by 25 since February, an average of 4.2 new agents per month. Between February and May, a dozen new companies joined the fray; by today, another 13 have received accreditation.

With 578 accredited agents (62% of the total), Cyprus has more approved agents than all others combined but, as we have noted before, Saint Kitts & Nevis holds the record on a per-capita basis; walk past a thousand Kittitians on the street, and you’ll run into at least one licensee.

Cyprus is the clear leader for two reasons. First, because the Cypriot government does not limit the number of approved developments (virtually any investment, or combination of investments, that meets the minimum capital requirement qualifies), and any type of company can apply for accreditation. As a consequence, firms of all shades – not just real estate developers and law firms but also wealth managers, investment brokers, tax advisories, accounting firms, and so on – have registered with the ministry of the interior.

The second reason is simpler; out of all CIP countries (with the exceptions of Turkey and Jordan, whose governments do not engage in accreditations), Cyprus has the largest population, more than twice as many inhabitants and the second most populous CIP-country, Malta.

See our complete list of accredited agents for all programs

Following a “clean-up” in March this year that saw the number of designated agents for Vanuatu’s Development and Support Program drop from a peak of 37 to just 14, the figure rose to 23 in May and now stands at 31. The Vanuatu Contribution Program (VCP), still has only a single exclusive agent, about whom little is known (see: Conspiracies and Foul Play – In Candid Letter, HK Lawyer Answers Long-Standing Questions on Vanuatu Citizenship).

The number of accredited agents worldwide, we must point out, is not to be confused with the number of investment migration companies overall, of which there are several thousand. Some 700 of these are registered in our Residence & Citizenship by Investment Company Directory.