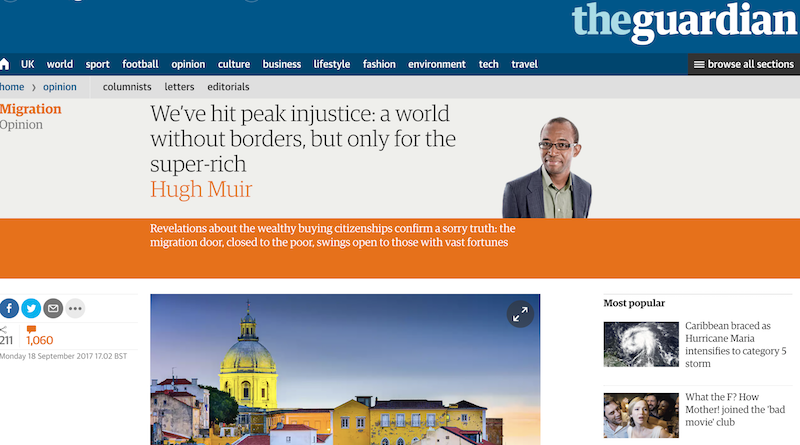 When The Guardian first posted two related articles on the Cyprus CIP Sunday night, I commented on those articles here, and expected that to be the end of it. But looking over my keyword alerts the next day, I found the story had been reprinted or referred to some 200 times across the web in less than 24 hours.

At least 20 of the articles referring to the original story are calling Golden Visa and CBI programs a “secret”. If so, they are the worst kept secrets I’ve come across in a long time; Several hundred companies market them online and in person. Hundreds of thousands of people have taken part in such programs; in China, last year alone, at least 20,000 did.

Yesterday, another story appeared, this time about a corrupt Brazilian who had acquired a Golden Visa in Portugal. Again, the man in question was not charged with any crimes until after he had already obtained his Golden Visa in Portugal. In other words, there was no reason for Portuguese authorities to reject his application. The case is, therefore, no indictment against the program, yet is presented as such by the duplicitous journalists.

This morning, I read a fourth piece, also in The Guardian.

Associate editor, Hugh Muir, writes “[…] in this era of rampant inequality, isn’t there something nauseating about rich entitlement set against the numerous, heart-rending tales of penniless striving? Try listening to the pleas of people desperate for a passport, not because they want easy passage through an airport or seek business advantages, but because to stay put means repression and possible death. Listen to the concerns of EU citizens who risk losing their status because of Brexit. Then listen to wealthy global citizens boasting of how they buy their way to mobility.”

Pure pathos. When someone tries to win you over by appealing only to the softness of your heart, rather than laying out the arguments in a dispassionate manner, odds are you’re being manipulated. Stoking class resentment by juxtaposing the experiences of the rich and poor; how original!

Muir also includes a number of factual errors, writing, for example, that Greece offers citizenship for EUR 250,000, when what’s actually on offer is a residence permit.

Ironically, these articles are themselves funded by a billionaire of questionable repute; The writers are sponsored by The Journalism Fund, whose second largest source of funds is The Open Society Foundation, in the main funded and controlled by one George Soros.

Why this sudden concerted effort to smear the investment migration industry? They say politics is downstream from culture. Are we witnessing the groundwork being carried out to shift public perception of investment migration in a negative direction, so as to make political crackdowns on it more palatable later?

Look, I would much rather write about real stories from the CBI industry, but the egregious, poorly researched assertions crafted by the cultural Marxists of The Guardian are somehow getting wings and I must now devote time and energy to setting the record straight. It may be futile, though, considering the volume and velocity with which this nonsense is spreading. It brings to mind one of Churchill’s celebrated phrases: “A lie gets halfway around the world before the truth has a chance to get its pants on.”