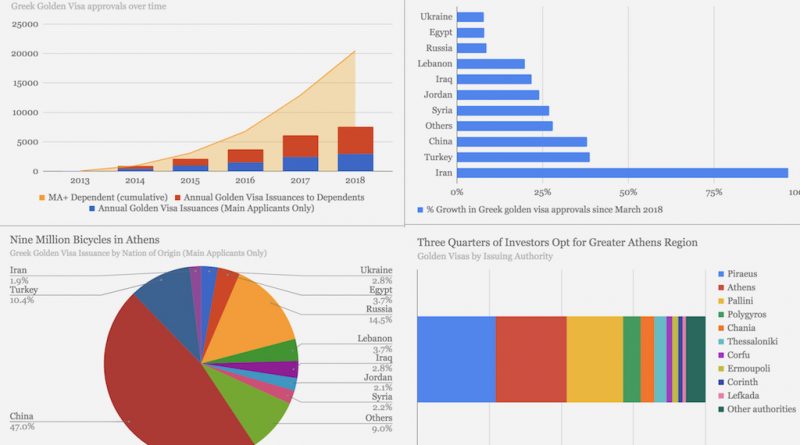 In the first half of 2018 alone, Greece issued nearly 3,000 golden visas – or the equivalent of all golden visas issued in Portugal over the last two years – bringing its grand total of golden visas issued since 2013 (main applicants only) to 8,367, leaving all its European competitors in the dust.

When last we chanced upon a statistical update from Greece, we predicted the program would overtake Portugal’s sometime this year. What we did not predict was that it would happen already in the second quarter, and certainly not at the scale revealed by the most recent data release.

How many golden visas have Greece issued?

Since opening in late 2013, Greece has issued 8,367 golden visas to main applicants and 12,089 to their dependents, bringing the cumulative number of residence permits under the program to 20,456, or about 6,000 more than the equivalent number for Portugal.

In the first six months of this year alone, Greece granted 2,968 visas to main applicants and 4,597 to dependents.

With five months still to go in 2018, Greece is poised to shatter records – its own as well as those of every other residence by investment program. If the trend continues apace, Greece will have approved nearly six thousand main applicants. Add to that their dependents, and Greece will pass15,000 golden visa-backed residence permits this year, making it the world’s largest golden visa, and greater than the US EB-5 program by 50%.

Where do the applicants come from?

While the Chinese are inching ever closer to an absolute majority among applicants, Russians make up close to 15%, and Turks more than one in ten.

Who brings the most dependents?

The spread among nationalities is considerable with regards to average family size. While applications from Iranians include, on average, only two individuals (typically a main applicant and spouse), each golden visa issued to an Iraqi brings nearly four individuals.

In which countries is interest in Greek golden visas growing fastest?

The amount of Iranians now holding golden visas in Greece has doubled since March. The heightened political and economic tensions in Turkey are driving a massive spike in interest on the Anatolian peninsula; in the last four months, the cumulative number of Turks holding golden visas rose from 222 to 308, an increase of 39%.

But what’s really propelled the Greek golden visa to a position of primus inter pares is the growing appetite for Hellenic property among the Chinese; Nearly four hundred of them acquired golden visas between March and July this year.

Where are applicants investing?

Property acquisitions are overwhelmingly concentrated in the Athens Metropolitan Area, which includes Piraeus and Pallini.