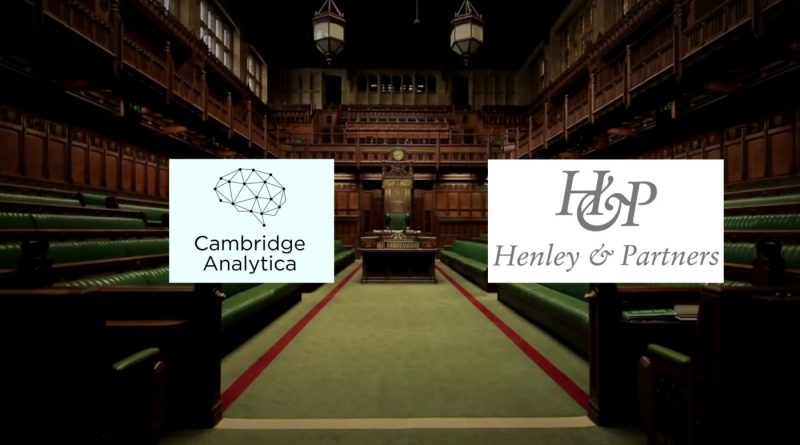 An interim report published by the House of Commons Digital, Culture, Media and Sports Committee (DCMSC) titled Disinformation and “fake news” has recommended that the UK government investigate claims that say the firms Strategic Communication Laboratories (SCL), Cambridge Analytica, and Henley & Partners have been involved in the “undermining of democracies”.

The report – which offers a wide array of recommendations on how to address ongoing concerns that online behemoths like Facebook and Google use (and possibly misuse) data for political ends – refers to Henley & Partners primarily in the context of their activities Caribbean, but also purportedly in Malta.

SCL and Cambridge Analytica have come under criticism for the alleged use of unethical methods of influencing election outcomes, including using Facebook data, micro-targeting, and manipulation of voters, a topic that has received global media attention in recent months.

What does it have to do with Henley & Partners? According to the report, the investment migration firm had supposedly worked together with SCL, who would manage many political campaigns, particularly in the Caribbean region, including several countries which have citizenship by investment programs.

We asked Henley & Partners for a response to the claims.

“Henley & Partners is both surprised and extremely disappointed to note that it has been included in a DCMSC interim report focused on disinformation and ‘fake news’, a subject far removed from the firm’s core services of advising high-net-worth clients and sovereign governments on residence- and citizenship-by-investment programs” according to a spokesperson of the firm.

The statement continues: “Henley & Partners is disconcerted that a UK parliamentary select committee chose to publish claims and allegations relating to our firm and the wider investment migration industry without making any effort to contact or engage with either ourselves or the relevant industry body, the Investment Migration Council.”

Inclusion in report “based on external influences”

The firm further noted that it believes “the inclusion of Henley & Partners in the DCMS Select Committee interim report is inappropriate and based on external influences, as well as a lack of understanding of the politics in certain countries where investment migration programs are operated, which is always a highly sensitive political topic. We will be engaging with the committee before the final report is published.”

We also asked Henley & Partners whether it was really the case that the firm helped electoral candidates find funding for SCL-managed campaigns in exchange for future promises of government advisory contracts.

“No. This is entirely untrue and is a fundamental misconception. Neither Henley & Partners nor its chairman Dr. Christian H. Kälin personally has ever provided funding for any election campaign. Furthermore, any government contracts that Henley & Partners has signed are completely removed time-wise from the alleged involvement in political campaigns in the Caribbean, therefore the suggestion that these two are linked does not make sense,” said a statement from the firm..

The statement further added that “We wish to make it very clear that Henley & Partners does not have, and never has had, any formal working relationship with Cambridge Analytica/SCL. We believe that the interaction between our firm and SCL has been consistently, and at times deliberately, misrepresented by certain parties. In reality, Henley & Partners was advising governments in the Caribbean on citizenship-by-investment at the same time that SCL was active in the region. It is therefore natural that there would have been a certain amount of interaction among the numerous advisors and consultants. It is entirely incorrect, however, to suggest that Henley & Partners was a formal partner to SCL in any way. Furthermore, we had no interaction whatsoever with SCL with regard to Malta.”

The Government of Malta – who was mentioned in the report as well – has also expressed its disappointment and issued an official statement strongly denying what they call the “false and unsubstantiated information” contained in the report, and has intervened with the UK Government through its Ministry of Foreign Affairs: https://gov.mt/en/Government/Press%20Releases/Pages/2018/July/30/PR181687.aspx