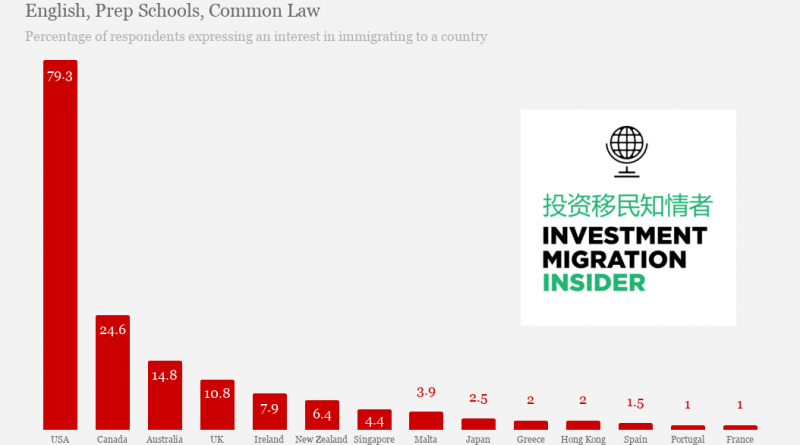 The report contains a wide range of notable and surprising findings, some of which we’ve dissected below.

Hurun Research surveys 224 Chinese HNWIs with an average net worth of US$4.5 million who either have already or are planning to emigrate. The proportion of these HNWIs who say they are considering immigration has dropped steadily for the last few years, reaching a high of 64% in 2016. The report does not specify whether the same 224 individuals are surveyed every year but, if that is the case, it would explain why the proportion considering migrating is falling as many of them will have followed through on their stated plans.

According to the Hurun Chinese Luxury Consumer Survey 2018, about 37% of HNWIs respondents are currently considering immigration, a 10% drop compared with last year. 12% of them have already emigrated or are applying to do so.

“The United States is definitely the first choice for Chinese HNWIs who are considering immigration. London has risen rapidly to become the sixth most popular destination for purchasing overseas property, overtaking Vancouver, Toronto and Melbourne for the first time. It is also interesting to note that 90% of those considering immigration intend to live in China after retirement“.

In other words, virtually all the Chinese HNWIs he surveyed, who said they planned to immigrate to another country, nonetheless say they will retire in China. This suggests that they are a) not planning to actually live in the country to which they are “immigrating” but rather are obtaining residence permits and passports for reasons of mobility, economic security, and education, rather than because they wish to physically settle abroad. This hypothesis is, indeed, supported by the report’s other findings:

‘Quality of education’ remains the most important reason for immigration among HNWIs, with a proportion of 83%, up by 7 percentage points year-on-year. Next comes the ‘environment’, with 69%, an increase of 5 percentage points. ‘Food safety’ comes next with 57%, surpassing the two traditional immigration reasons of ‘healthcare’ (38%) and ‘social welfare’ (36%).

Together with Visas Consulting, Hurun Research ranks investment migration destinations based on a series of objectively quantifiable criteria to determine which are most suitable for Chinese investor migrants. The weighted index scores a country based on eight metrics:

While the 2018 Chinese Immigration Index still ranks the US first, with a score of 8.7, the list contains several newcomers that have bumped others off the list. New on the list is Greece and Cyprus, while Antigua & Barbuda and Dominica are now out.

Quite apart from Hurun and Visas Consulting’s scored index, however, are the stated immigration preferences of the surveyed individuals themselves. Some eight of ten respondents expressed an interest in immigrating to the US, a quarter to Canada, and one in seven to Australia (respondents can tick off more than one box).

Hurun also asked its respondents which single destination interested them the most in terms of buying property, and found that about two-thirds listed cities in the US as their top choice.

– Ireland and Greece, in particular, saw their scores on the index rising, as well as increased popularity among investors

– The US’ score was boosted by Trump’s tax cuts

– Brexit has not deterred Chinese investment in the UK; in fact, the opposite has happened, in part thanks to the favorable exchange rate brought about by uncertainty regarding Brexit

– Greece debuts with a number six spot in the ranking, partly thanks to the property bargains to be had in the recovering economy, as well as a deeper integration in China’s Belt and Road initiative