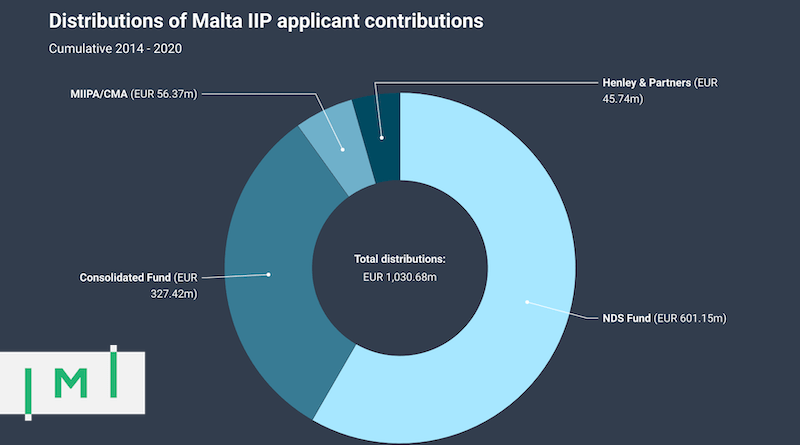 In its 7th annual report on the Malta Individual Investor Programme (which will also be its last because the MIIP has since been replaced by the MEIN policy) the Office of the Regulator for the Granting of Citizenship for Exceptional Services (OR-GCES, known as ORiip when it regulated the IIP) has released a comprehensive set of statistics covering the final 18 months of the Malta IIP’s operations, the period between July 1st, 2019 and Dec 31st, 2020.

By far the richest data-set among all RCBI programs

In an alteration welcome to industry observers that attempt to compare program performance year-on-year (such as this newspaper), OR-GCES is changing its reporting schedule to coincide with the calendar – rather than fiscal – year. As a consequence, this report covers the 18-month period leading up to the MIIP’s closure, rather than the customary 12-month July 1st to June 30th period. A similar statistical report on results from the MEIN policy’s first full year of operations (2021) is expected later this year.

As we have come to expect from this office, the report is an example of best practices in the field of RCBI-program reporting; 78 pages that report in minute detail on practically all matters germane to the program’s operations, including (but far from limited to):

In his foreword, Regulator Carmel L. De Gabriele once more lamented the degree to which the program he oversees had been vilified in the media and in supranational institutions even as none of the program’s detractors had taken the trouble to engage his bureau:

“[…] on this issue, I cannot resist in showing my utter perplexity to the fact that after so many years during which several institutions, both national and international, have openly voiced their doubts as to the seriousness of the Malta Programme in all its aspects, they have to date failed to get in touch with my Office to witness with their own eyes how my Office is meticulously scrutinizing to the minutest detail the work performed by the Malta Individual Investor Programme Agency so as to ensure that its job is being optimally carried out in respect of each and every application received and ultimately decided upon.”

He also discussed, with great attention to detail, the investigation into the case of Chetcuti Cauchi (which resulted in the complete exoneration of the firm in 2019), and the transition to a new citizenship by investment program in November 2020.

More than half of applications submitted by just four agents

It is evident that in the Malta IIP, as in so many facets of life, the Pareto principle applies. Of the 62 licensed agents that submitted applications during the period

Rejection rates, the report discloses, rose during the 18-month period: Out of the 340 applications received, only 207 were successfully concluded. Of the remainder, 101 were refused and 32 were withdrawn/allowed to lapse due to inactivity, indicating a rejection rate of 33%.

Naturalizations at 7-year low thanks to closed borders

In 2020, Malta received 317 applications, the second-lowest number since the program started, higher only than the 2018 figure. About a third of these were either withdrawn or rejected outright, while 185 received approvals-in-principle, which ultimately resulted in the naturalization of 134 main applicants and 309 of their family members. Note that applications and their outcomes are not typically registered in the same year due to the required residence period.

Among approved main applicants in 2020, 57% were from Europe (which includes Russia), 26% from Asia, 9% from Africa, 5% from North America, 2% from the Middle East, and 1% from the Caribbean. In 2020, applications from South America and Oceania were altogether absent.

"The months-long closure of Malta’s International Airport and Seaport for passenger traffic, as well as other airports and seaports worldwide, likewise affecting passenger traffic, practically brought the finalization of applications to a standstill and the granting of citizenship to many of the successful applicants postponed sine die," commented the Regulator in an apparent reference to the low number of naturalizations.

Though the main applicant gender balance remains firmly in favor of men, women accounted for a record full-quarter of all approved applicants in 2020.

The share of applicants who chose to buy rather than rent property in Malta, meanwhile, fell to a low in 2020, reaching a historic nadir of just 6%.

That observation was further exacerbated by the simultaneous decline in the average value of the properties purchased; EUR 782,000, a sharp decline on the EUR 859,916 recorded during the preceding year and another record low. Average rental prices among the vast majority that chose not to purchase homes also ebbed to a low-water mark, reaching just EUR 92,955 (over a five-year period).

Revenues in all forms amounted to EUR 167.2 million in 2020, the lowest such number recorded since 2015. About three-quarters of that came in the form of applicant contributions, 12% as government stock (effectively bonds), while the remainder was distributed across real estate (bought or rented) and miscellaneous fees.

In a testament to the Regulator's commitment to transparency (at least to the extent that it does not interfere with the equally valid concern of privacy), the report outlines precisely how the contributions have been distributed throughout the program's history: The National Development and Social Fund was the beneficiary of the bulk (about 60%) of the EUR 1.03 billion of contributions raised, while about a third went directly into the government's consolidated fund (essentially the state piggy-bank). Some 5.5% accrued to the Malta Individual Investor Programme Agency (MIIPA), or what is today the Malta Community Agency, while Henley & Partners, the program's original concessionaire, which in 2013/14 assisted the government in designing and implementing the program, has so far reaped some EUR 46 million in compensation.