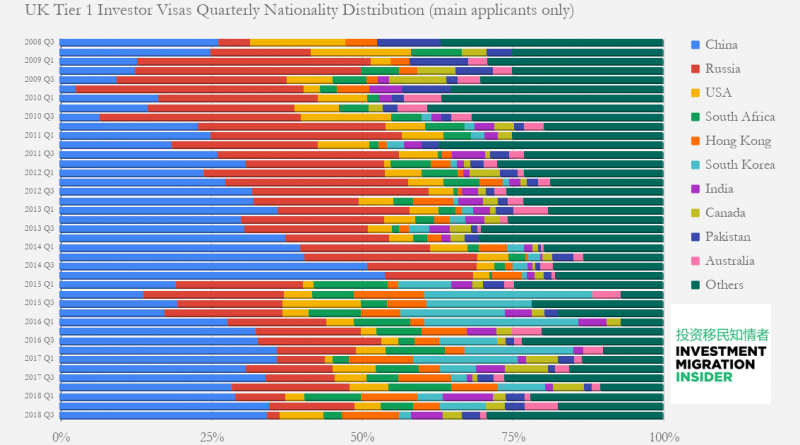 As the UK Tier 1 Visa program turns 10 years old, we’re taking a deep dive into the statistical archives of the Home Office to recap a decade of immigrant investment and entrepreneurship on the British Isles.

The United Kingdom’s Tier 1 Visa program – which has both an investor and an Entrepreneur category – published its first statistical overview in the third quarter of 2008. Today, exactly ten years later, the Office for National Statistics released figures Q3 2018.

If the 2018 trend continues apace, the Investor category will finish slightly ahead of 2017, while the Entrepreneur category looks set to outperform itself by 28% this year.

Chinese investors accounted for 38% of visas issued under the Investor category in the third quarter. Overall, since 2008, Chinese nationals account for 34% (1,341) of investor visas.

Russians have seen their share of the program crater almost completely. While they still make up more than a fifth (828) of all investor visas issued since 2008, only two Russians received such visas in Q3 2018.

Investments raised – Were it a country, the UK Tier 1 program would be #34 in Africa by GDP

In 2018 so far, the home office has issued 284 investor visas and 803 entrepreneur visas to main applicants, raising investments of at least GBP 729 million (US$930 million) in the process.

Since the program opened in 2008, it’s raised a total of GBP 6.47 billion, or about US$8.3 billion. The Investor and Entrepreneur categories respectively accounted for some 71% and 29% of the total.

Let’s put that number in perspective:

The value of entrepreneurial activity arising from these investments is, naturally, incalculable, but it doubtlessly exceeds that of the direct investments by an order of magnitude.

“The continued strong demand for the UK Tier 1 Investor visa, in my opinion, is attributable to Brexit; we’ve witnessed a steady increase in applicants since the referendum,” says Farzin Yazdi, head of Investor Visa at Shard Capital, headquartered in London.

“Brexit has created a new element of uncertainty to the financial and family planning of HNWIs, some of whom would otherwise have acquired a citizenship by investment in countries like Malta or Cyprus with an intention to ultimately live in the UK, mainly for their children to be educated here. The weakness of the pound also eases the financial requirement,” Yazdi points out, adding that “in this industry,  particular, Brexit just ensured that people who wished to form ties to the United Kingdom definitively invested in the United Kingdom as such.”

“We certainly see growing interest from China and SARs, which currently comprise 48% of the applicants for the Tier 1 Investor Visa,” notes Rafael Steinmetz Leffa of Shard’s China Desk. “Applicants from that part of the world generally prefer to obtain residence permits and have the option to become citizens long-term, rather than participate in programs that grant citizenships directly.”

More on the UK Tier 1 program: