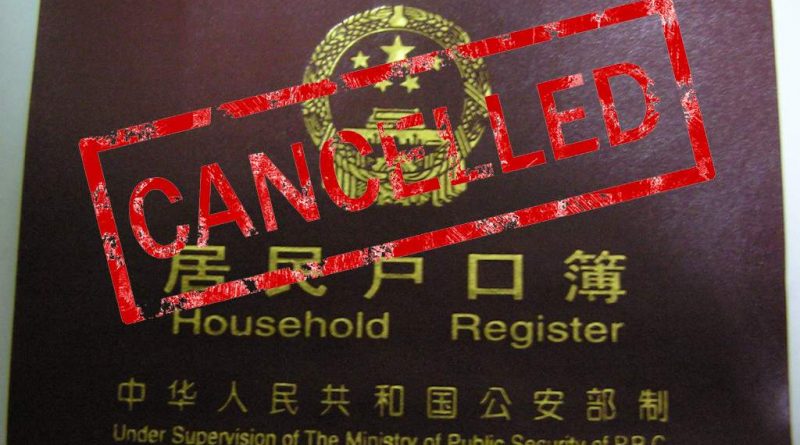 In a story that has alarmed hundreds of thousands of overseas Chinese, the Shanghai Municipal People’s Government has issued a statement on its official WeChat account in which it informs readers that Chinese nationals holding a foreign permanent residence permit (PR) will have to cancel their Shanghai hukou (户口 – household registration) or have it forcibly canceled by local authorities.

The Chinese hukou system is a set of registers that officially records a Chinese person’s place of residence within China, along with a variety of identifying information such as a person’s birth date, family members, residential history, and social security rights. The system is analogous, in some ways, to the Russian system of internal passports.

It’s also the basis on which a Chinese person’s national ID-card, the shenfenzheng (身份证), is issued. Such ID-cards are required to conduct a wide array of day-to-day activities, including – but not limited to – buying train tickets, renting a flat, staying in a hotel, opening a bank account, making online purchases and so on.

While Chinese authorities’ inflexible stance on dual citizenship has long been known – many Chinese holders of foreign passports have had both their Chinese nationality and hukou revoked upon arrival in the country – this marks the first time a government municipality formally extends such draconian measures to individuals holding foreign PRs.

Whereas a former Chinese citizen who now holds a foreign passport may reasonably reside and conduct business in China, those merely holding foreign PRs would fall between two chairs if their Chinese hukou were canceled, as they would have no means of identifying themselves (once their ID-cards expire, they cannot be renewed without a hukou), and also would not have a foreign passport on which to rely.

Furthermore, once a Chinese person’s name is erased from his family’s hukou, the individual may experience severe challenges with regards to family-related financial matters, such as the transfer of property or the receipt of inheritance.

So far, only Shanghai’s municipal government has announced the rule change, which is set to take effect on May 1st, and it’s not yet clear whether the policy will be rolled out across the rest of the country.

You may read the original article in Chinese here.