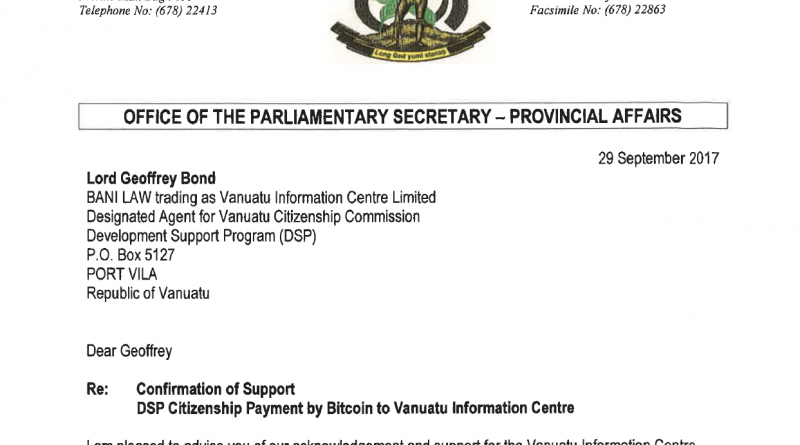 The Government of Vanuatu, represented by Parliamentary Secretary to the Prime Minister, Hon Andrew Solomon Napuat MP, has confirmed in an official letter addressed to Geoffrey Bond, Chairman of the VIC, an entity that handles applications to the Vanuatu DSP Citizenship Program, that the Government supports the VIC’s taking payment in Bitcoin. This marks the first time a citizenship by investment program obtains official endorsement to take payments in a cryptocurrency. 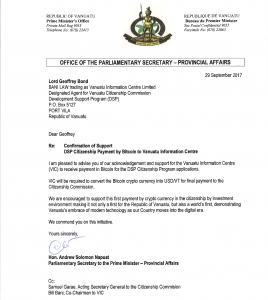 “This is a significant step forward in our efforts, working with the Government of Vanuatu to propel the Vanuatu DSP to the forefront of CIPs globally”, said James Harris, Managing Director of the Vanuatu Information Centre Network.  He added, “there remains some suspicion surrounding the use of crypto-currency in financial transactions, and some fears that it can be related to undesirable activities. In fact, the opposite is true, as crypto-currency exists in a fully traceable ledger where the entire history of its creation and trading is visible. Therefore, our pioneering of the use of Bitcoin payment is a further strengthening of AML processes, and at the same time provides enormous flexibility in a world where international financial transactions have become ever more difficult”.

Chairman of VIC, Geoffrey Bond commented, “While attempts have been made in the past to effect payments for citizenship by investment programs via Bitcoin, these efforts never had the political stamp of approval, and were shut down as a consequence. However in this case, the Government of Vanuatu has explicitly expressed a desire to be at the forefront of adopting new technologies, officially encouraging the VIC to receive payments in Bitcoin.”  He added, “In addition to the normal due diligence probity checks that are required to obtain Vanuatu Citizenship, all Bitcoin transactions will be run through our partner’s Australian Exchange and meet with the normal compliance requirements imposed by the Australian Financial Regulator.”

“I’m convinced Vanuatu’s bold move will give them a considerable competitive advantage in the citizenship market,” said Christian Nesheim, an investment migration specialist who advised the VIC and the Vanuatu Government on Bitcoin adoption during their visit to Bangkok last week. “Many early investors in Bitcoin would like to realize some of their earnings without incurring large capital gains taxes. Ideally, then, they would convert their cryptocurrency into tangible assets in a low-tax jurisdiction. So far, the asset classes available to this type of investor have been limited, but we are now seeing an increasing number of crypto-to-real-assets type investments on offer. As Vanuatu will now be the only country to offer citizenship for Bitcoins, I think the program will see a surge in interest more or less immediately.”

Plans to conduct due diligence on the blockchain-based SelfKey digital identity system are also in the works, which will include accepting SelfKey native token (KEY) and a marketplace through which the Vanuatu DSP Citizenship Program can be applied for. SelfKey will facilitate the application process and avoid unnecessary intermediaries for greater transparency in total cost. Through the platform, applicants will be able to certify the required documentation, share them securely with VIC and pay the required contribution.

“The immigration by investment sector is quickly realizing of the potential of blockchain for payments, KYC and identity management and Vanuatu is moving forward to be the first to implement it” said Edmund Lowell founder of FlagTheory.com, KYC-Chain.com and SelfKey.org