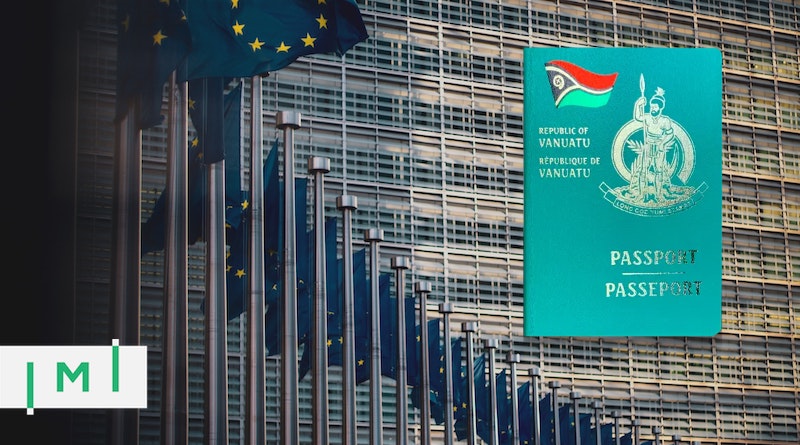 “The Commission is proposing today a partial suspension of the application of the agreement with the Republic of Vanuatu allowing citizens of Vanuatu to travel to the EU without a visa for stays of up to 90 days in any 180-period,” reads a press release posted on the European Commission’s website today.

“This is necessary to mitigate the risks posed by Vanuatu’s investor citizenship (or “golden passports”) schemes on the security of the EU and its Member States.”

Visa-free access to the Schengen area is the core attraction of Vanuatu’s popular citizenship by investment programs. The Commission indicated the Ni-Vanuatu government had been alerted on several past occasions that the revocation of Schengen travel privileges was not inconceivable.

“Today’s proposal follows extensive exchanges with the authorities of Vanuatu, including prior warnings of the possibility of suspension. The schemes allow citizens of third countries to obtain Vanuatu citizenship – and thus also visa-free access to the EU – in exchange for a minimum investment of 130,000 USD.”

The Commission stated it had, upon “careful monitoring”, concluded the island’s CBI programs had displayed “serious deficiencies and security failures” in their screening procedures. This, indicated the Commission, was evidenced by the granting of citizenship to applicants listed in Interpol’s databases; application processing times too short and approval rates too high to plausibly be adequate; and the absence of systematic exchange of information with the applicants’ home countries.

The Commission also lamented that Vanuatu did not exclude certain nationalities typically barred from applying under other CBI programs.

The result, the statement reads, was that Vanuatu’s CBI programs allowed those who would otherwise need EU visas to “bypass the regular Schengen visa procedure and the in-depth assessment of individual migratory and security risks it entails.” The Commission did not specify the ways in which it considered the vetting of the “regular Schengen visa procedure” to be more thorough than that conducted by the Vanuatu FIU.

The statement also hinted that security concerns were not the only motive for the proposal but that the Commission also objected to visa-free travel in the EU being used as a selling point.

“Additionally, investor citizenship schemes operated by Vanuatu since 2015 are commercially promoted with the expressed purpose of granting visa-free access to the EU, while the visa waiver agreement is not aimed at allowing visa-required travellers to circumvent the visa requirement by acquiring Vanuatu citizenship,” commented the Commission.

The statement specified what the Commission means by “partial” suspension:

“The suspension would be applicable to all holders of ordinary passports issued as of 25 May 2015, when Vanuatu started issuing a substantial number of passports in exchange for investment. These holders would therefore no longer be allowed to travel to the EU without a visa (but would retain the possibility to apply for a visa to visit the EU).”

The decision on whether to move ahead with the proposed Council Decision now rests with the European Council.

“If the Council decides to partially suspend the agreement, Vanuatu should be notified at least two months before the suspension is applied,” continues the statement. “During the period of partial suspension, the Commission must establish an enhanced dialogue with Vanuatu, with a view to eliminating or substantially mitigating the security risks for the EU and its Member States. Should Vanuatu introduce sufficient measures to this effect, the partial suspension should be lifted.”