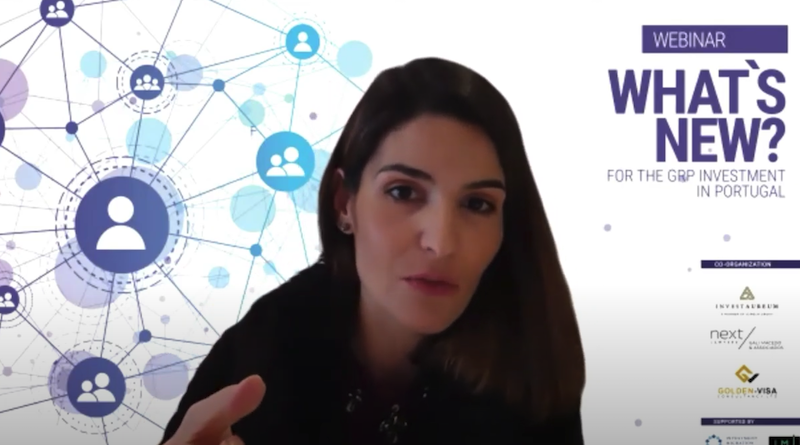 During a recent online discussion, viewable in its entirety in the video below, a panel of experts answered questions on Portugal’s new golden visa rules, including:

“A lot of pressure”

Questioned as to what he thinks explains the government’s decision to postpone the effective date of the new rules to 2022 after having initially pointed to July 1st as the start of a transition period, Nicolas Salerno, an Investaureum board member, said lobbying efforts from the real estate sector and pragmatic thinking within the government had likely played an important role.

Salerno said it was widely acknowledged, both among those in government and in business, that “there was a lot of pressure and people complaining about a lack of accommodation inside the cities and pressure on [real estate] prices and this was something that needed to be addressed.”

The government had initially signaled they would be doing away with real estate investment in Lisbon and Porto altogether but ended up changing direction by allowing golden visa investment in commercial real estate to continue also in the cities.

The government’s motivation, from the start, he pointed out, was to develop the interior of the country, not only commercially but also for residential properties.

“They didn’t want to ‘kill’ this opportunity to boost the real estate sectors in the interior and they also wanted to maintain what’s creating a lot of jobs, namely commercial real estate, and keeping the possibility of developing job-creating hospitality projects in the coastal areas and the main cities. […] I think there is a certain willingness in the government to keep real estate prices in the principal cities at a certain high level. They don’t necessarily want to put downward pressure on prices but they don’t want to see a bubble inflated either.”

“A lot was said; very little has changed in practice”

“What happened in the cities, politically, was that more and more the government was feeling that Portuguese locals were being priced out of the market, unable to afford the cost of living and housing. This happened because a lot of investors, instead of using the properties they bought, would put them out on AirBnB. So they wanted to shift golden visa-related investment out of the centers of Lisbon and Porto. But I think, in the end, though a lot was said, very little has changed in practice.”

Seixas also points out that in a country with Portugal’s geography, “interior” doesn’t mean remote backwaters.

“Remember that Portugal is a very narrow country from East to West; so you may be in the interior of Portugal but still never more than an hour away from coastal areas.”

Prompted for an explanation as to how Portugal had been able to maintain very high application and approval rates for its golden visa program despite the pandemic in 2020, Joana Whyte, a lawyer with Lisbon-based Next-Gali Macedo, attributed the enviable performance to two chief factors:

“Obviously, we saw the number of tourists declining drastically but, despite that, the property market remained strong and one of the reasons for that was that the golden visa program didn’t stop. Most public functions remained open and, although we are seeing a delay in the appointments with the immigration authorities, that doesn’t mean we can’t perform the notarial act on behalf of the client. We, as lawyers, can represent the client for those purposes. Another reason was that Portugal was able to control and largely prevent the first big wave of infections and I think a lot of prospective investors took note of that, which drove increased interest.”