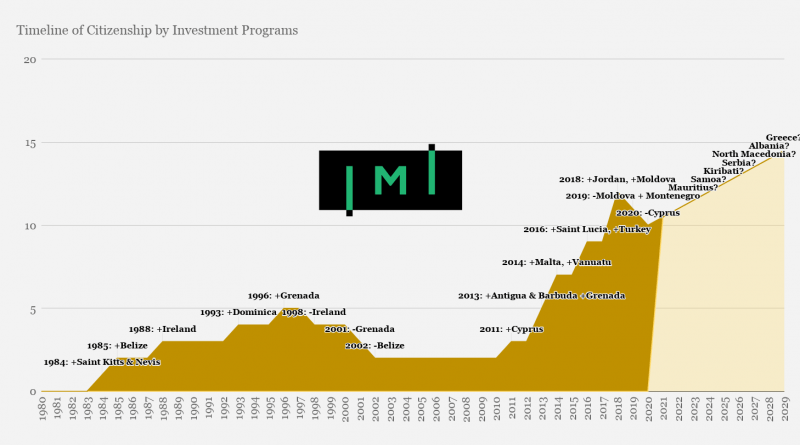 In recent years, Citizenship by Investment Programs (CIP) have become the favoured route to a second passport. Holding citizenship in another country is a gateway to several benefits and opportunities that can secure a prosperous future for an individual and his/her family. It is easy to see why so many people from every corner of the globe are keen to become an investor in one of these sought-after programs.

The process of obtaining citizenship through investment was first implemented in 1984 by the Caribbean nation of St. Kitts and Nevis with other countries following suit shortly after.

Today, nations all around the world have implemented CIPs as a means to second citizenship, leaving businesspeople and high-net-worth individuals overwhelmed with choices. With all these options available, we take a look back at the last 36 years of Citizenship by Investment programs and which new countries may soon be joining the ranks.

St Kitts and Nevis: from US $150,000
Widely considered the market pioneer for citizenship by investment programs, the St Kitts model for due diligence and processing has been emulated by CIPs the world over. Close to 20,000 passports have been issued to date. As of July 2020, St. Kitts and Nevis has reduced the family donation for its CIP from USD 195,000 to USD 150,000 for a limited time only (available until December 31st 2020).

Ireland: from £1 million
Shuttered in 1998 and subsequently replaced by the Irish Immigrant Investor Program, the Irish CIP received its fair share of controversy over irregularities involving Saudi and Pakistani investors.

Belize: from US $10,000
Following in St Kitts and Nevis’ footsteps, Belize launched a formal CIP that ran until 2002, when it was discontinued due to US pressure over 9/11 related security fears. It was by far the cheapest Caribbean CIP during the 1990s.

Marshall Islands: from US $50,000
Around 2,000 passports were sold over the program’s 10-year lifespan, mainly to Chinese nationals. A Taiwanese company was authorised to promote this ad hoc CIP and allegations of misconduct were rife. While the country enjoyed a mutual visa waiver agreement with the USA at the time, naturalised citizens ofthe Marshall Islands were required to apply for a travel visa to enter the USA.

Commonwealth of Dominica: from US $100,000
This Commonwealth country has been operating a CIP since 1993 and is the second program of its kind to launch in the Caribbean. The Dominica program was halted during the late 1990s but regained traction a decade later.

Cyprus: from €2.15 million
Cyprus was the first EU member state to launch a CIP, albeit at a far higher price point than its global competitors. Cypriot economic citizenship to this day affords investors exceptional global mobility, tax optimisation and settlement rights.

Please note that this program has been discontinued as of November 2020.

Grenada: from US $150,000
The Grenada Economic Citizenship Program faced strong political opposition upon launch, selling citizenship for only US $40,000. The program collapsed over irregularities in 2001 but was subsequently relaunched in 2013 as the Grenada Citizenship by Investment Program.

Antigua and Barbuda: from US $100,000
By emulating the St. Kitts and Nevis model, the Antigua and Barbuda CIP quickly gained significant market share as a leading Caribbean program. It is mainly sought out by foreign investors for its attractive price point for families – where a family of up to 4 can obtain second citizenship from as little as US $100,000.

Malta: from €1.2 Million
Boasting four-tier due diligence and more visa-free destinations than any other investment citizenship program, the Malta Individual Investor Program is today considered the industry gold standard for CIPs. The program is currently undergoing significant changes, with prices set to increase.

Vanuatu: from US $130,000
Vanuatu’s CBI program is the only one of its kind in the Asia-Pacific Hemisphere and is renowned for its quick and efficient application process. Applicants interested in the program are required to make a one-time, non-refundable monetary contribution to the Development Support Program (DSP).

Turkey: from US $250,000
The Turkish CIP was initially launched with a minimum investment requirement of US $1 million, but due to a lack of market response, the investment threshold was subsequently reduced to US $250,000. Significantly, the program requires applicants to maintain their investment for only 3 years. Unsurprisingly, it has fast become one of the most popular CIPs in the world, processing over 1,000 applications by as early as July 2019.

Jordan: from US $1 million
Given the hefty price tag and the fact that the Jordanian passport does not offer visa-free access to the EU, the industry did not expect the Jordan CIP to gain much traction. Yet surprisingly, the program received over 100 applications in the first six months since launch.

Moldova: from €100,000
Priced at only €100,000, the Moldova CIP looked set to take the European market by storm – except it didn’t. Suspended shortly after launch, the program was recently discontinued as the country’s CBI law was repealed due to political pressure, both internally, and from Brussels.

Kenya
Earlier in 2020, Kenya’s investment promotion agency indicated that the government is considering a citizenship by investment program. The proposed program objective is to increase foreign direct investment, stimulate job creation, and reduce its sovereign debt. No further announcements have been made to date.

Greece
In addition to planning the relaunch of its golden visa program, the Greek government is reportedly considering the launch of a citizenship by investment program as well. The required investment may potentially be around the €2.5 million mark, setting it on a competitive path against the Cyprus CPI.

Slovenia
The head of the Slovenian Government’s Strategic Council, Ivan Simič recently announced that the country’s government will consider a proposal to launch a citizenship or residence permit program through investment. The preliminary minimum investment could potentially start at €1 million.

It has been 36 years since St. Kitts and Nevis first launched their CBI program and paved the way for so many other countries to do the same. Since its humble beginnings in 1984, it still remains one of the more preferred programs among its counterparts. The industry continues to evolve and welcome new nations from all corners of the globe that are keen to explore the possibilities of Citizenship by Investment programs and their accompanying benefits. Here’s to three more decades of obtaining citizenship through investment.

Want more information? Visit our individual program pages for more details on all the current citizenship by investment programs, or contact us now for a free consultation.