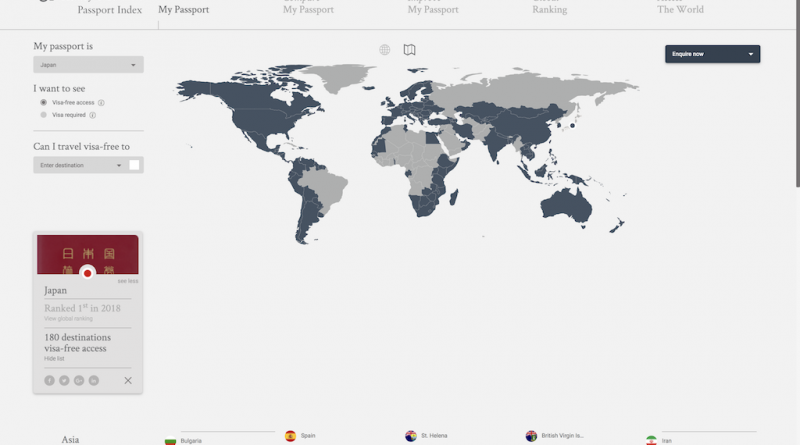 Japan and Singapore have knocked Germany off the top spot of the Henley Passport Index, with citizens of both Asian nations now enjoying visa-free access to a record 180 destinations. The German passport has topped the travel freedom index — updated in real-time as visa-policy changes come into effect — for the past five years but it is now only the second most powerful globally, with access to 179 destinations worldwide.

Japan and Singapore rose to the top of the index after, among other developments, Uzbekistan lifted visa requirements for Japanese and Singaporean nationals in early February. Uzbekistan’s efforts to increase tourist inflows saw a number of other countries in Asia and the Middle East (including Turkey, Indonesia, and Israel) gaining access. In general, the Asian and Middle East regions have in recent months seen high levels of visa-policy activity compared to their European and American counterparts, where the signing of new cross-border agreements on short-term travel has been far less frequent.

As a result of these shifts, the UK has dropped down one rank to 4th place overall, but the country still provides its citizens with visa-free access to 177 destinations. The US continues to hold 5th place on the index, offering its passport holders access to 176 destinations. The Russian Federation, meanwhile, has climbed three places to claim 45th position. Partly as a result of China’s recent visa-waiver agreement with the UAE, it has shown the most growth in its region over the past year, moving up 11 places compared with 2017 and now ranking 74th globally.

Syria, Iraq, and Afghanistan sit at the bottom of the Henley Passport Index, each still only able to access 30 or fewer destinations visa-free.

The Henley Passport Index is widely acknowledged as the original and most authoritative passport index, with historical data spanning 13 years. The ranking is based on exclusive data from the International Air Transport Association (IATA), which maintains the world’s largest and most accurate database of travel information, and is enhanced by extensive, ongoing in-house research. The index is updated in real-time, as and when visa-policy changes come into effect. Unlike other passport indexes, which only count countries as destinations, the Henley Passport Index includes both countries and territories in its dataset, making for a more robust and holistic view of global passport power.

Hugh Morshead, Member of the Executive Committee of the leading investment migration firm Henley & Partners, says, “Global citizenship is on the rise, with more and more individuals seeking opportunities and experiences beyond their countries of origin. Borders in certain key parts of the world may be tightening, but elsewhere access is evolving. In terms of visa policies and regulations, every week we are witnessing a growing number of countries — especially outside of the West — opening up their borders to strategic partners as they seek to deepen diplomatic relationships and tap into the immense economic value that tourism, international commerce, and migration can bring.”

The Japanese and Singaporean passports are among the few in the world that provide visa-free access to all of the four major global economies — India, China, the EU, and the US — which is part of what makes them the best travel documents to have today.

Over the past year, China and Indonesia have also made great strides in improving the global mobility of their citizens, each gaining access to 13 additional destinations and climbing 11 and 10 positions on the index, respectively. Dr. Parag Khanna, Senior Fellow at the Centre on Asia and Globalisation at the National University of Singapore, says the power of Asian nations is growing steadily.

“It is perhaps long overdue that wealthy Asian states such as Singapore and Japan would equal and now even exceed Germany’s ranking among the world’s most powerful passports,” says Khanna. “These two states in particular are identified as peaceful commercial powers, with their citizens interested primarily in business and investment activities. For its part, Japan has long been one of the world’s leading capital exporters, and this role has grown in the wake of ‘Abenomics’, the set of economic policies implemented by Japanese Prime Minister Shinzo Abe at the outset of his second term. Singapore, which has long been the portal for investment into Southeast Asia, is now also the major conduit for outbound Asian investment as well.

“The most recent rankings also show promising gains for South Korea and Malaysia. South Korea has edged ahead of Australia and New Zealand, reflecting its pattern of international commercial prowess in the mold of Japan. Malaysia has gained ground on most EU members, with its businesses now reaching across Asia and Africa. We can certainly expect that in the coming years more Asian powers will use the combination of commercial expansionism and reciprocal entry policies to climb up the Henley Passport Index.”

UAE sets the standard for the Middle East

The UAE continues to be a leading example of travel freedom in the Middle East, climbing an impressive 34 positions on the Henley Passport Index over the past decade — and 11 positions in the past year alone. It now provides its citizens with visa-free access to 140 destinations worldwide. The UAE climbed to 27thplace on the index after gaining entry to China and Ireland earlier this year. It also recently signed a visa-waiver agreement with Burkina Faso, set to come into effect in the coming months. Between 1999 and 2018, visa restrictions on Emirati citizens have been lifted by some 45 different countries, which helps explains the UAE’s remarkable performance on the index.

Ryan Cummings, Director of Signal Risk, says the UAE’s continued positive growth on the index should come as no surprise. He comments, “The country’s trajectory is indicative of its entrenched political stability within a geopolitical zone that has been beleaguered by political uncertainty and economic fragility in recent years. The UAE has also positioned itself as a global commercial, economic, and travel hub that is only expected to grow in strength as the country continues to leverage its unique strengths.

“Within the Middle East, the UAE’s climb up the Henley Passport Index means that it now comes in at a close second to Israel. With no discernible shifts in either of the countries’ respective trajectories, however, the UAE’s more neutral geopolitical status and its location within a more stable sub-region within the Middle East could well see it beating Israel to the top regional spot within in the near term.”

Investment migration is the most direct route to improved mobility

Morshead points out that the countries that offer the most credible citizenship-by-investment programs in the world consistently outperform on the Henley Passport Index. “Malta, for example, offers the top-ranked investment migration program globally, and the country also scores very highly on the index, holding the world’s 7th most powerful passport and offering visa-free access to 173 destinations,” he says. “Austria also makes it into the top 10, with access to a total of 177 destinations. Cyprus is not far behind in 15th place, with 163 destinations accessible visa-free.” Caribbean countries offering citizenship-by-investment programs have likewise performed very well on this year’s index.

“For those looking to improve their global mobility, connectivity, and access with a stronger passport, alternative citizenship is the most effective solution. Demand for citizenship-by-investment programs is rapidly growing as talented individuals seek to transcend the limitations imposed on them by their passports. The Henley Passport Index is relevant to anyone seeking to strengthen their level of access as well as to governments trying to understand their passport power in a global context,” concludes Morshead.