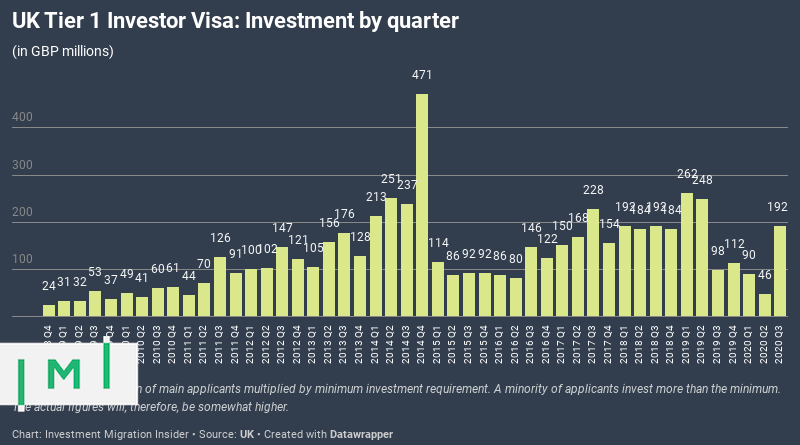 96 main applicants and 172 family members received residence permits in the UK in Q3 on the back of capital injections through the Tier 1 Investor Visa amounting to GBP 192 million. The number represents a 317% improvement on the preceding quarter and a 96% improvement on the same quarter last year.

“I am delighted to see that the pent-up demand created by the post-COVID-19 lockdown period has come to fruition,” says Farzin Yazdi, Head of Investor Visa at London-based Shard Capital.

Yazdi points out that the rebound is precisely what his firm predicted in August, following the release of Q2 figures that showed the lowest quarterly approval volumes in a decade. At the time, Yazdi also predicted the now-observable growth in interest from American applicants.

“Having spoken to a number of these American applicants about their motivations to migrate to the UK, as we are now able to look after them with the launch of our US desk, politics always crept up in conversations.”

At 9% of the total during the quarter, Americans were tied with Russians for third-place in the top applicant nationalities. As is the norm, Chinese applicants constituted the single-largest source of Tier 1 investors (24% of the total), closely followed by Hongkongers (21%).

Despite a bullish turn in Q3, the program’s performance so far in 2020 as a whole still lags that of previous years by a considerable margin: At the end of Q3, an aggregate of 164 main applicants had been approved since January 1st, about half the number that were approved in the first three quarters of 2019 (304).

“It seems that lockdowns have highlighted an obvious fact, which is the strategic position of the UK’s time zone (GMT). Our new way of working seems to involve less international travel, and it is to the advantage of the more discerning as they no longer have to wake up in the middle of the night to have a call with Australia or the West Coast of the United States.”

Yazdi also noted with interest the growing number of applicants from India who, he says, have historically preferred the Entrepreneur route.

Acknowledging the presence of a number of wild-cards on the horizon (a new immigration system for the UK, the finalizing of Brexit, and the progression of the pandemic), Yazdi was nonetheless ebullient with regards to the program’s near-term prospects.

“I am very optimistic and reiterating my previous comment that we will see a slightly higher mean average of Investor Visa applicants.”