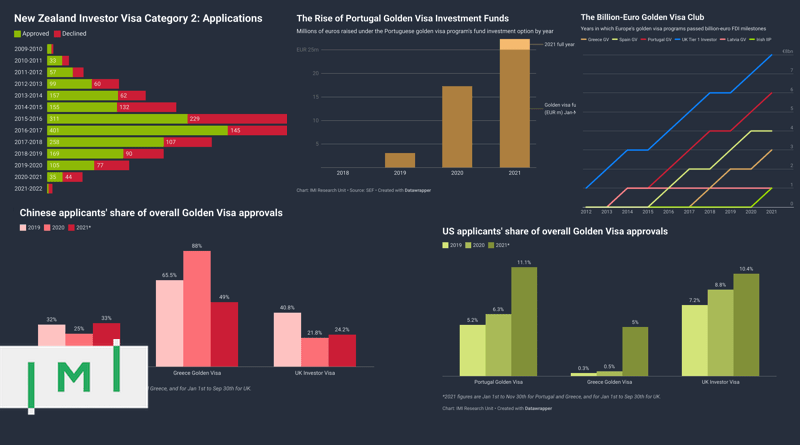 2021 saw some golden visas regain ground lost to the pandemic last year, while others continued to decline. Chinese demand has turned patchy, while American interest is unequivocally on the rise. These are five graphs that characterize the year in golden visa programs.

The first billion is the hardest

The number of European golden visa programs that have raised more than a billion euros in revenue reached six in 2021, as Ireland's IIP finally joined this exclusive club.

The UK's Investor Visa program, which was also the first-ever European golden visa to reach this milestone, saw total FDI reach EUR 8 billion this year. That estimate, however, assumes all the program's participants invested the minimum amount, which isn't the case, so the true total is likely in excess of EUR 10 billion.

Americans back on the Old Continent

The rise in American interest in investment migration, which first took hold in 2020, continued - and even accelerated - in 2021. The most up-to-date figures come from the golden visas of Greece, Portugal, and the UK, and show steady, seemingly inexorable growth in US application volume. The upward trend has been most precipitous in Greece, where the American share of all applications is up by a factor of ten.

While American applicants multiplied in 2020 and 2021, investment migration demand from China has been spotty since the pandemic started. Among many programs (for most of which 2021 YTD figures are not available), Chinese applicants' share of the total has shrunk. In three of the four big European golden visas, results have been mixed:

Some programs require the physical presence of applicants before the approval can be finalized. That is the case for New Zealand's Investor Visas, for example, where hermetically sealed frontiers have left hundreds of applicants in the lurch and occasioned a virtual suspension of the program since the beginning of the pandemic.

Portugal's fund investment option has continued to gain favor among golden visa applicants in 2021. The trend has resulted from a mix of applicants' inability to travel to see properties, greater awareness of the fund alternatives, and the tax advantages of fund investment compared to real estate. Expect this trend to continue in 2022, as the Portugal Golden Visa's new rules take effect, excluding the country's hottest local property markets from contention (at least for residential real estate).