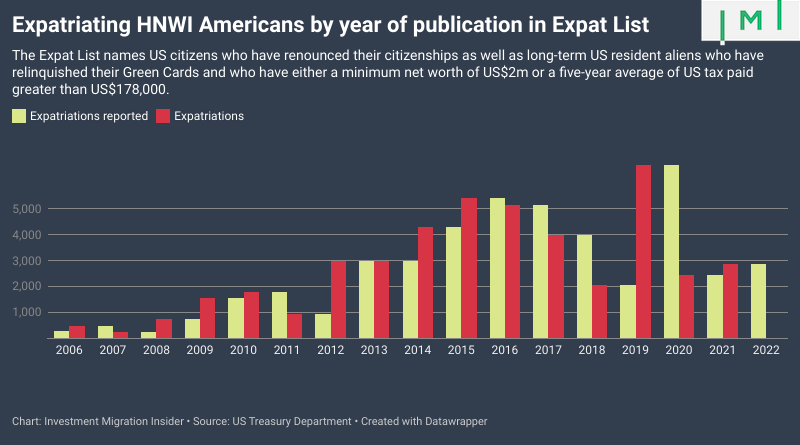 In this week’s Quarterly Publication of Individuals Who Have Chosen To Expatriate, which covers Q3 of this year, the US Internal Revenue Service (IRS) lists the names of 819 so-called Covered Expatriates – i.e. citizens and, in some cases, long-term residents whose net worth exceeds US$2m or whose average annual tax bill over the last five years has exceeded US$178,000 – who have successfully expatriated, typically by renouncing their US citizenships.

While the figure represents a decline both from the preceding quarter (1,473 names were listed in Q2) and from the same quarter last year (977), the cumulative 2,872 HNWI expatriations recorded in the first three quarters of 2022 already exceeds the 2021 full-year total (2,426).

Because of the 12-18 month delay in publishing the "Expat List", most of the renunciations reported this week stem from the Q1-Q3 2021 period.

"Since that time [the middle of 2021], our office has almost tripled the number of individuals who have attended appointments," says international tax and immigration attorney David Lesperance, who repeatedly highlighted Americans' sharply reduced ability to renounce during COVID (due to consulates eschewing renunciation appointments on flimsy pretexts) but who is now increasingly able to get appointments for his renunciation clients. "

"This means that future lists will continue to show significant growth,” comments Lesperance, hinting at the deluge of expatriations he expects now that consulates are once more giving appointments to individuals waiting for a chance to renounce their citizenships, a group Lesperance has previously estimated now make up a waitlist of tens of thousands.

“While more and more US missions are scheduling renunciation appointments, it is still a game of 'whack-a-mole' as offices open up, get backlogged, create waiting lists, and then close again," he points out. "We spend a significant amount of our time constantly tracking appointment availability."

“It is also worth noting that this list includes Long-Term Residents who have been identified as Covered Expatriates," he adds. "Therefore, a future list might include the new UK Prime Minister, Rishi Sunak, and his wife Akshata Murthy. Whether they appear on the list will depend completely on whether they properly filed as residents of a tax treaty country on their US tax returns for their time after moving from the US to the UK.”

In November last year, the Association of Accidental Americans - a French-registered non-profit representing individuals who, by accident of birth on US territory, have become US citizens and who have since found themselves unable to give up their American nationality, causing them consternation in the form of, for example, difficulty obtaining European bank accounts - took the State Department to court over the latter’s suspension of Voluntary Expatriation Services at its various diplomatic missions around the world. The suspensions, the plaintiffs had argued, violated the US constitution and could not reasonably be justified by the outbreak of COVID, the ostensible reason for the suspensions. A US District Court dismissed the suit in a summary judgment at the end of September, a ruling the Association immediately appealed.