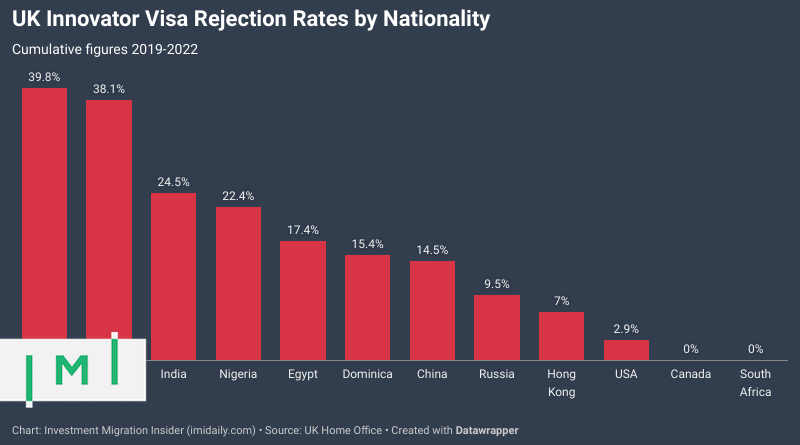 The UK Home Office issued 68 new Innovator Visas to main applicants in the first quarter of the year, representing practically no year-on-year change but a 13% reduction on the preceding quarter.

With 14 approved main applicants, Indians were the largest applicant nationality during the quarter and are also the top applicant group overall, accounting for some 18% of all approvals since the program's opening in 2019. Numbering 112 applicants, Chinese nationals have been the second-largest group of approved applicants, followed by Nigerians (59), Pakistanis (50), Hongkongers (40), and Americans (34).

Gaining Innovator visa approval appears to have become more difficult over the last year; While the rejection rate was a mere 10% just three quarters ago, it has risen steadily since then and reached a record 35% in Q1 2022. The figure doesn't take into account applications that were either withdrawn or allowed to lapse.

That remarkably high rate of rejection, however, does not apply in anywhere near equal measure to the different applicant nationalities. While 100% of South Africa's 15 and Canada's 10 Innovator visa applicants received approvals, 33 of 83 Pakistanis, 8 out of 21 Iranians, 39 out of 159 Indians, and 17 out of 76 Nigerians were rejected.

Reacting to the Q1 numbers, Eric G. Major, chief executive at investment migration advisory Latitude, last week stated he thinks the Innovator Visa could garner more than a thousand applications annually within a few years, indicates he and his colleagues are not phased by the Q-on-Q reduction in approvals in the first quarter of the year.

"We are not concerned with the number of applications in Q1’22, as it is slightly higher than Q1’21 and we all know that application volumes are cyclical," he says in a comment to IMI. "We expect to see the numbers increase in the quarters ahead and even outpace last year’s total figure."

Questioned as to what's driving the elevated rejection rates over the last year, Major acknowledges that the upward trend is unmistakable and chalks it up to the Home Office's growing tendency to second-guess the conclusions of the endorsing bodies, the entities authorized to endorse Innovator visa applications based on their assessment of the suitability of the business through which the applicant seeks to qualify.

"Based on the program’s maturity and growing scale," says Major, "we believe that this is down to increased scrutiny on behalf of the Home Office. It is representative of the HO challenging the work (and determinations) of certain endorsing bodies – demonstrating some concern about the genuineness of certain applicants, and the true viability, scalability, and innovativeness of certain business plans being endorsed."