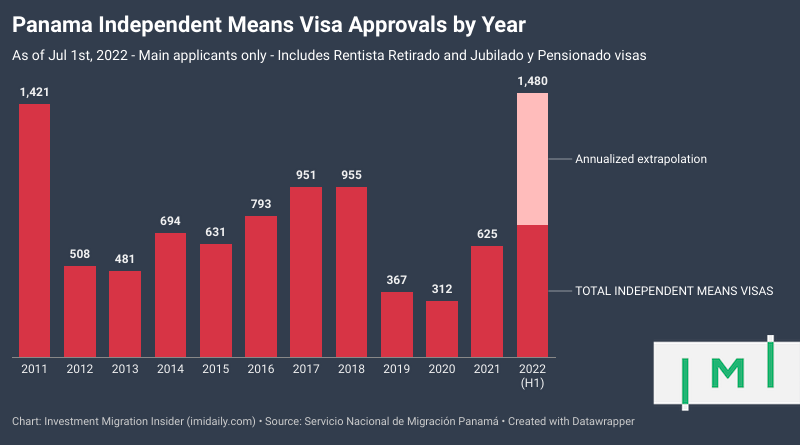 740 main applicants received independent means visas (chiefly Jubilado y Pensionista) in Panama in the first half of 2022, figures from the country’s National Migration Service released yesterday showed. Already at the half-year mark, the number of visas issued in 2022 to date exceeds the full-year 2021 total, hinting at a record year for this class of visa.

If the tendency persists in the second half of 2022, Panama's independent means visa approvals will reach an all-time-high this year.

Among investment-based visa, meanwhile, the downward trend is becoming even more pronounced than in Q1. While 890 investor visas (Panama has more than a dozen kinds of investor visas) were approved in Q1 this year, Q2 saw only 523, portending a further deceleration also in subsequent quarters.

The results from H1, if extrapolated to the end of the year, would imply Panama is looking at fewer tham 3,000 investor visa approvals this year, sharply down from the 4,318 approvals recorded in 2021.

As we explained when Q1 figures were released in early April, most of the decline in investor visa interest this year relative to last year is attributable to the drop in approvals under the Friendly Nations Visa, a category that has historically accounted for nine out of ten investor visa approvals in Panama. That program became decidedly less attractive in the second half of last year:

The FNV rules now stipulate that applicants make an investment of US$200,000 in either real estate or a fixed-term deposit, or obtain employment sponsorship from a Panamanian company. Moreover, while FNV-holders were previously awarded immediate permanent residency in Panama, they must now undergo a six-month assessment period, following which they (if approved) are awarded a two-year temporary residency. At the conclusion of two years, applicants become eligible for permanent residency.

The Friendly Nations Visa approval volume may have further to fall still; because of the six-month assessment period and a backlog created by the rush to apply before the new, heightened minimum investment requirements took effect last year, the government is still processing FNV applications from last year. Once applications filed under the old rules have been processed, we should expect significantly lower FNV approval figures.

The trend appears mostly flat among the non-FNV investment-based visas on offer in Panama. The most popular investor visas, excluding FNV, remain the real estate investment and fixed-term deposit categories of the so-called "self solvency" visa, both of which require investments of US$300,000.