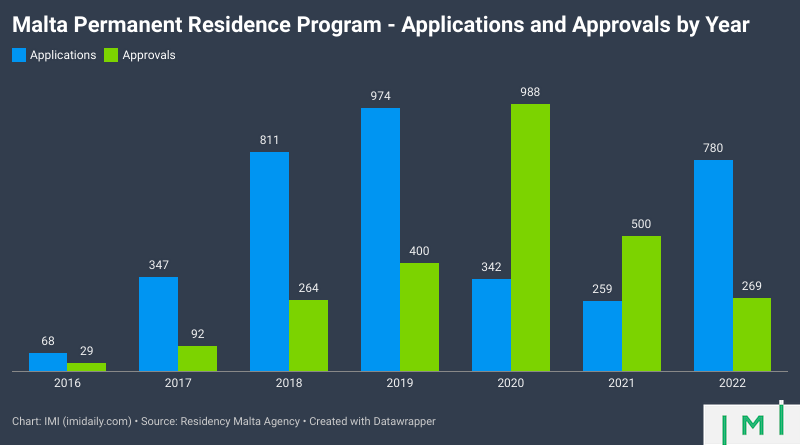 Following seven consecutive years of operations, Malta’s Permanent Residence Program (MPRP, previously MRVP) has raised a total of EUR 528 million worth of government fund contributions, securities investments, fees, real estate acquisitions, and property leases. This according to the Residency Malta Agency (RMA), which governs both the MPRP and the Nomad Residence Permit program.

Since the MPRP's opening in 2016 (then under the name MRVP), 2,542 main applicants have received permanent residency in Malta. On average, their (directly measurable) economic contribution has amounted to EUR 207,532 apiece.

In early 2021, the MPRP replaced the MRVP, doing away with the requirement to invest EUR 250,000 in government bonds in favor of introducing required non-recoverable government contributions of either EUR 28,000 to EUR 58,000 (higher contributions required for those who choose to lease, rather than buy, property).

The rationale was that while the government bond purchase requirement merely served to improve the Maltese state's liquidity, which the investment-grade rated Maltese government didn't really need, a lower but non-recoverable amount would overall provide greater economic benefit to public coffers.

In 2022, a year during which the RMA approved only about half as many applications as in 2021, the program raised a relatively modest EUR 33.4 million. The comparatively low number of approvals and investments in 2022, however, is attributable to the reduced application volume observed in 2021; 259 applications.

But in 2022, the MPRP received 780 applications, more than tripling the preceding year's figure, indicating program revenue could reach EUR 100 million this year.

Among the 3,580 MPRP applications it has received to date, the RMA has approved 71% and rejected 10%. A further 16% are currently in processing, while applicants themselves withdrew 3% of applications.

The program remains highly reliant on the now-recovering Chinese market, which has supplied 87% of applicants thus far. A strong marketing focus on China helped the program gain a flying start in the early years but also caused it to see a sharper drop in new applications than many of its less China-dependent EU peers in 2020 and 2021, when China sealed itself off from the world and the country's investors put investment migration plans on ice.

Charles Mizzi, CEO of the RMA, told local press on Thursday that the preponderance of the 780 applications filed in 2022 had arrived in the latter half of the year, buoyed by a relaxation of COVID-restrictions.

The program's Chinese contingent is followed (in the distance) by the Vietnamese, Russian (excluded from the program since March 2022), South African, and Turkish ones.

Questioned as to how long those applying today should expect processing to take, Residency Malta Agency's Head of Unit for Corporate Services, Vicky Spiteri, indicated that while the Agency provides a decision on Nomad Residence Permit applications within 30 working days, MPRP applications currently have an expected processing time of four to six months.

Since the early days, the Agency has focused on incorporating digital solutions in its work, where such are possible and appropriate, and has invested considerable resources to this end, says Spiteri.

"This investment included the launch of an Agents’ Portal," she explains, "where licensed agents can securely check the status of their applications and find all official communication issued by the Agency. We have continued to refine process flows and automate functions to improve efficiencies. We introduced an online identity verification system via which licensed agents may verify the identity of their clients. The next phase of the project anticipates the launch of the partial submission online of an application."

Spiteri emphasizes that such automation and digitalization are only implemented to the extent they do not compromise the program's integrity and, particularly, its due diligence work, which still requires the attention of human specialists.