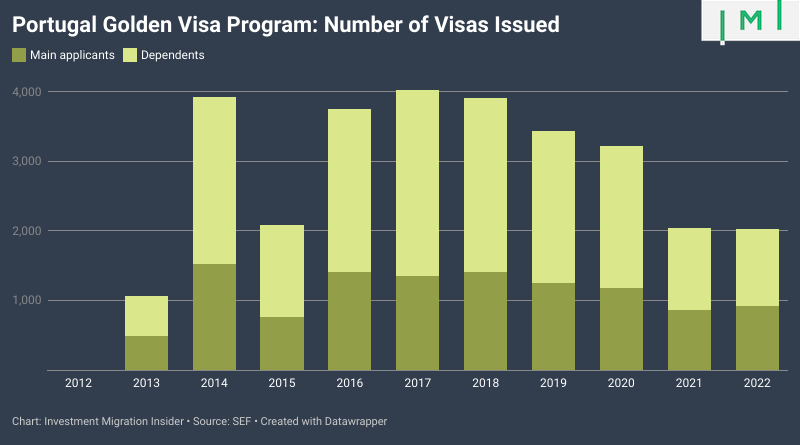 Between the start of this year and the end of September, Portugal's golden visa program had raised EUR 465 million from 926 investors and 1,099 of their family members. With a full quarter left in 2022, the program has already raised more investment and approved more applicants than in all of 2021, a year that saw 865 main applicants approved on the basis of EUR 461 million worth of investments.

Chinese applicants constituted the largest investor group in September, accounting for 26 of 120 approvals, followed by Americans, at 17 approvals. The UK made a surprise appearance in the top 5 applicant source countries in September, recording a record 16 approvals during the month. The UK has only featured on the top five list on two prior occasions in the program's history (in March this year and in December last year), and even then only with four approvals each time.

At 14 approvals, Brazilians were the fourth-largest investor contingent in September, while Indians (who have appeared on the monthly top five list in seven of the last 12 months) posted seven approvals.

Just three months after entering the all-time top 5, Americans have now surpassed South Africans to claim 4th overall, as we predicted in June:

As of June 2022, Americans have overtaken Russians to become the 5th largest Portugal golden visa applicant group, numbering 445 overall since 2012. Considering the clip at which Americans have been applying this year (averaging 21.7 applications per month), US nationals are likely to also outrank South Africans (5.2 applications per month) and Turks (6.0) to place 3rd in the all-time nationality ranking before the year is over.

The Chinese, meanwhile, are experiencing a bit of a resurgence - the reasons behind which were deftly outlined by our columnist Luc Lu in The 4 Factors Driving China’s Investment Migration Market Rebound - and now look as though they may become this year's top investor group after all, a title the Americans had looked likely to take at the half-year mark. So far this year, the US accounts for 17.5% of approvals to China's 17.0%, a balance that has been shifting in China's favor in the last two months. This will be a photo finish.

In terms of the number of applications approved by qualification route, "fixer-upper" real estate is now the single-largest category, followed by the conventional subparagraph 3 residential property investment category. Expect approvals in this latter category to diminish considerably over the coming months as applications filed in 2022 (i.e., after this category was excluded for the big cities) reach the approval stage. Growth in the fund investment route appears to be slowing somewhat, at least in relative terms.

In absolute terms, the fund investment route's growth trajectory is remarkable and is on track to nearly triple last year's performance, both as regards the number of applications approved under this option and the investment raised.