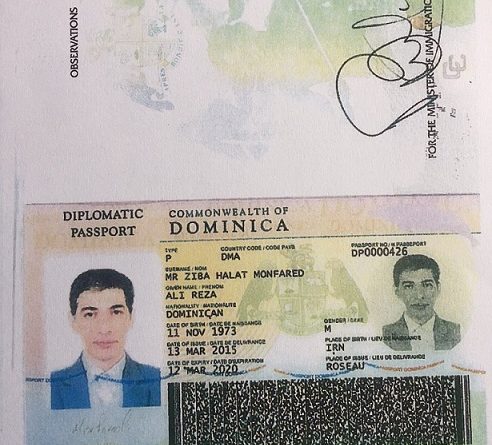 A story involving accusations of corruption, lies, and under-the-table dealings at the highest political levels is unfolding in the Eastern Caribbean.

The saga began when Lennox Linton, head of the island’s parliamentary opposition, the United Workers Party, appeared on an episode of CBS’ 60 Minutes in January. Linton implied that Prime Minister Roosevelt Skerrit had been involved in the granting of diplomatic passports to criminals sought by INTERPOL.

Following his statements on American TV, Linton almost immediately came under fire back home, where critics said he had caused irreparable damage to the reputation of Dominica and unnecessarily implicated the CBI program, which has nothing to do with diplomatic passports. PM Skerrit called a press conference in which he assured the Dominican public that diplomatic passports were not, under any circumstances, sold.

Linton subsequently went on the offensive, calling for a press conference of his own. The opposition parliamentarian demanded an immediate end to the issuance of diplomatic passports, pending an independent inquiry into exactly “what has been going on during these past 17 years”, and suggested the “indiscriminate distribution” of diplomatic passports posed a grave existential threat to the Dominica CIP.

During the same press conference, Linton claimed the Skerrit administration had issued 227 diplomatic passports between October 2010 and January 2016 and that, when asked in Parliament, the government had refused to reveal the identities of the holders because the information was too “sensitive”.

In a damning indictment of the Skerrit government, Linton indicated the administration’s refusal to disclose this information meant that something was “amiss”:

“And I will tell you what is amiss people of Dominica,” Linton noted, according to Dominica News. “This for me is evidence that diplomatic passports are being sold because what the information would have disclosed is that people who have found themselves in trouble with the law but had our diplomatic passports still continue to hold on to them. They should be revoked, they should withdraw them. If you found out that they are involved in international banditry, money laundering or terrorism or so, but they still have the passport. Why do they have them? Because they paid for them and the people who received the money are not willing to refund it. So if, what you have paid me, you are not willing to refund, then you have no authority to ask me what I have taken from you in exchange. And that is what the answer to the passport question is all about, they are hiding information in order to prevent the public from knowing the truth…”

The discussion flared up again earlier this month when Sam Raphael, the developer of Dominica’s (largely CBI-funded) Jungle Bay Resort, accused senior members of Linton’s opposition party of being guilty of the very same transgression for which it is lambasting the government, claiming he personally bore witness to the sale of diplomatic passports in transactions worth several million dollars.

The money, Raphael alleged, went towards funding the UWP’s election campaigns both in 2005 and 2009, and added that Linton himself was privy to the transactions. The hotelier further claimed he had the wire transfer records to substantiate his assertions.

Brushing off the accusations as an “elaborate concoction”, Linton retorted that the opposition, by definition not part of the government, has no authority to issue passports and therefore would not be in a position to sell them, suggesting that someone in the market for a diplomatic passport would be senseless to approach anyone but the incumbent administration with such a proposition. Linton further demanded that Raphael produce evidence to support his claims.

Commenting on the dispute during an interview on DBS Radio, Senior legal counsel to PM Skerrit, Tony Astaphan, called Linton’s demand for evidence “revealing” because Linton “is prepared to challenge an eye witness to produce documentary evidence. Linton, who is not and have never been an eyewitness to any of the alleged transactions he’s been referring to,” suggesting it was hypocritical of Linton to call for evidence when he himself had never produced any to substantiate his own claims.

Former leader of the UWP, Earl Williams, echoed Linton’s defense, saying “Money being transferred in itself is evidence of nothing, you must have the nexus … Sam needs to tell us either the UWP stole those passports or somebody in the government facilitated them in receiving those passports, otherwise, Sam is just wasting his time, wasting his effort…” and added that the government was using Sam Raphael as a “puppet” and that if there were any actual evidence to support their allegations, Raphael would not be the “crier of that information”.

“Lying through his teeth”

Linton later followed up, telling Dominica News “[Raphael] wants the people of Dominica to accept on his say-so that it was for diplomatic passports but I have not heard that from the other people that he supposedly involved within the party at the time. Who do I believe? Sam Raphael, who is obviously lying through his teeth for favors from Skerrit right now, trying to destroy the political opposition in order for him to get his monies to build Jungle Bay at Morne Acouma, to build his cottages and his villas and to sell them and to make his money?”

On Tuesday, Raphael appeared on the radio seeking to clarify why he had publicly accused the UWP of selling diplomatic passports. He suggested allegations of diplomatic passport peddling severely harmed the reputation and continued existence of the CIP, and that public discourse on the matter should be limited to Dominica so as not to jeopardize what has become the country and the government’s main source of revenue.

“People can say whatever they want here, but when you take it beyond the boundaries and you take it to the international media and you deliberately damage the reputation, in some ways, permanently of the country and actually based on my knowledge of your background, you were engaged in the same thing that you are accusing the other side of. That’s where I had the difficulty,” Raphael told DBS Radio.

Today, in an open letter published on Caribbean News Now, addressed to Sam Raphael, Cherry Pacquette calls on Sam Raphael to urge the government, with which he has a close relationship through what she describes as his de facto role of CBI-spokesman, to follow Antigua & Barbuda’s example of increasing transparency by, among other measures, disclosing how many diplomatic passports are in circulation, how many of them belong to members of parliament, how many have been recalled and what the titles of the respective diplomatic passport holders are.

Challenging Raphael, Ms Pacquette wrote “Mr Raphael, only transparency can protect Dominica’s CBI program now; the question is: Are you bold, sincere, and patriotic enough to demand it?”

Demands for increased transparency have been on the upswing in the Caribbean lately, most recently resulting in Antigua & Barbuda releasing a full list of diplomatic passport holders. Nonetheless, the release of reliable statistics regarding applicant numbers, nationalities, and amounts invested is still intermittent and ad-hoc in several CIP countries.

Such asymmetric information leaves room for foul play, whether real or imagined, and suspicions thereof could alone be enough justification for EU to revoke access to Schengen and, by extension, consign CIPs, not just in Dominica but in all of the Caribbean (and, quite possibly, further afield), to the proverbial ash heap of history.

They say sunlight is the best disinfectant. Whatever ghastly sight may meet Caribbean voters when they turn on the lights, it can’t be worse than what awaits them if they don’t.