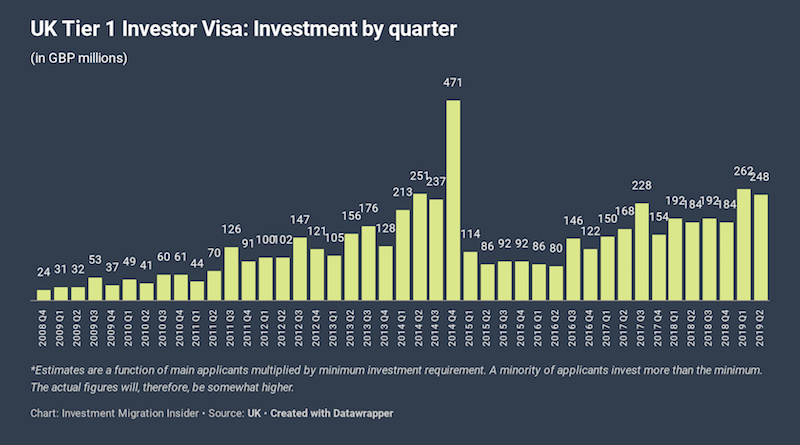 While the number of main applicants dipped slightly in Q2 – from 131 to 124 – the overall number of dependents rose to levels not seen since before the program’s minimum investment requirement doubled in 2014. Including dependents, 350 individuals secured their Indefinite Leave to Remain on the basis of an investor visa in the second quarter of the year.

So far this year, 255 main applicants and 381 of their family members have received golden visas in the UK, impressive figures when considering the whole of record-year 2018 saw 400 main applicants gain approvals.

Assuming each main applicant invests no more than the minimum £2 million – which is not the case – the program will have raised more £510 million so far this year. The actual number is likely much higher.

Should interest remain equally buoyant throughout the year, total investments in the scheme will exceed a billion pounds in 2019. That means the UK’s Tier 1 Investor Visa would dethrone Portugal to become Europe’s most lucrative golden visa.

Accounting for 45% of investor visas, mainland Chinese applicants remained the top nationality constituency. More noteworthy, perhaps, is that Hongkongers came second, taking 13 visas, up from 7 last quarter. That represents a new record for the semi-autonomous territory; not since the entry price was half of today’s – five years ago – have more Hongkongers obtained UK Tier 1 Investor visas in a single quarter.

Since the unrest over the extradition bill only began in earnest in June, Hong Kong interest in the program may set new records again in Q3.