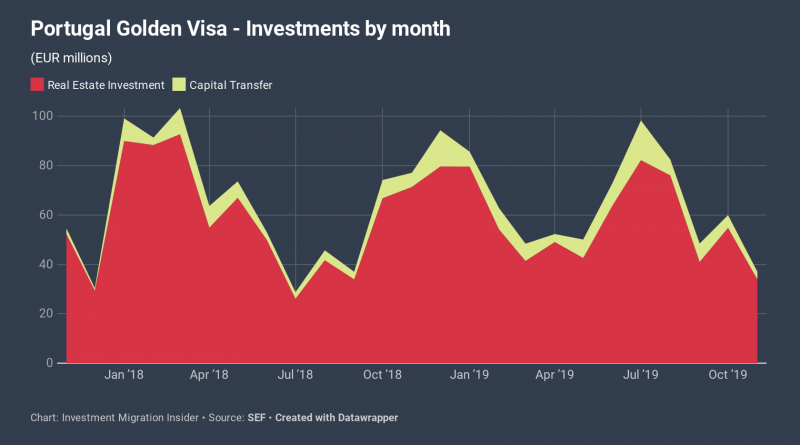 Portugal is about to reach a milestone only passed by three other residence programs in history, but November saw investment slump to a 17-month low, and overall revenue this year will be the lowest since 2015.

Not since July 2018 have fewer investors received approvals under the program. Capital inflows reached a corresponding nadir in November, as only EUR 37 million found its way to Portugal through the program.

As usual, nine-tenths of investment took the form of immovable property, while capital transfer accounted for the remaining tenth.

By the end of November, overall investment under the auspices of the ARI had reached EUR 4,948,268,913 or about EUR 52 million shy of EUR 5 billion, a historic milestone that Portugal’s golden visa is poised to reach within the next 4-8 weeks.

Chinese investors – invariably the largest applicant group since the beginning in 2012 – numbered only 17 in November, down from 28 in October. The number of Brazilian main applicants – 14 in November – now rivals that of the Chinese. Not far behind are Turks, South Africans, and Russians.

With a month remaining in the year, Portugal has approved 1,163 main applicants and 2,047 of their family members in 2019, an 8% year-on-year decline from the same 11 months in 2018. Investment revenue has dropped to a similar degree and the program is on track to end the year at its lowest annual investment figure since 2015.

Want to know more about the Portugal Golden Visa? To see recent articles, statistics, official links, and more, visit its Program Page. To see which firms can assist with applications to the program, visit the Residence & Citizenship by Investment Company Directory.