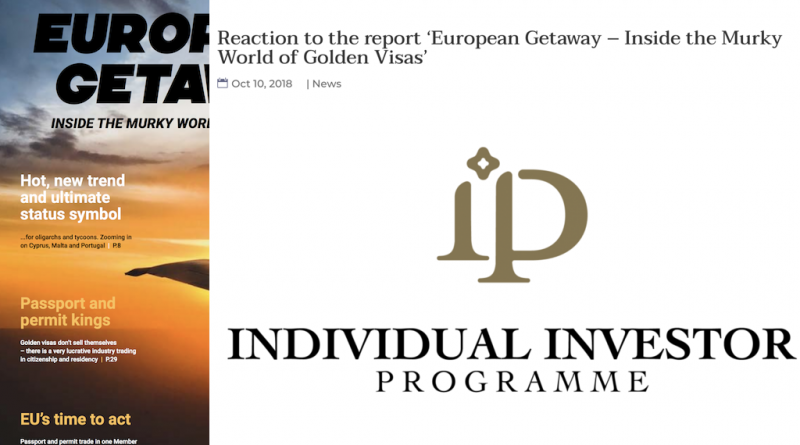 In response to today’s report from Transparency International – European Getaway; Inside the Murky World of Golden Visas – Malta’s government has issued the following statement:

Press Statement issued by the Government of Malta

The Government of Malta took note of the report published today by Transparency International and Global Witness, entitled ‘European Getaway – Inside the Murky World of Golden Visas’.

In the there are elements with which Government, through the Malta Individual Investor Programme Agency (MIIPA), agrees and support, and others which do not seem to be accurate or adequately researched.

MIIPA agrees with the recommendation that there should be standards of enhanced due diligence across the board. Malta has been advocating for more cooperation between jurisdictions in the aspect of due diligence and background checks, and has also taken the lead through the organisation of a conference focused on due diligence for the RCBI industry held in May 2018. The Agency also welcomes the recommendation to broaden anti-money laundering requirements including on approved agents. MIIPA is also in favour of establishing mechanisms for the coordination of information sharing between Member States concerning rejected applicants.

MIIPA would also like to draw the attention to the fact that the number of applicants approved through the Malta Individual Investor Programme is only a very small fraction of the 1 million individuals acquiring citizenship in any of the EU member states.

It is important to highlight that most of the recommendations are already in place for the Malta programme, and these suggestions seem to have been taken from the IIP and recommendations that Malta has been making in dedicated fora. These include the suggestion that all applicants and their family members are subject to enhanced due diligence and that all documents are checked by the Malta Government Agency. Checks on wealth are one of the pillars of the internal due diligence system. Pending court cases are also taken into consideration and criminal charges lead to rejection of the application. There is an independent regulator whose specific role is to oversee the running of the programme and receive complaints. Malta also has the necessary mechanism to revoke citizenship in cases of new adverse evidence that becomes known on approved individuals. The Agency is in fact currently reviewing a case of an individual who was granted citizenship in 2015, new information about whom is currently being made publicly available. Malta is also the only country, together with Austria, which as the report states, publishes the names of individuals who obtain citizenship.

The report also highlights that the Regulator does indeed go into a detailed review of the administration of the programme and makes his own recommendations to the Agency to improve the system. Although MIIPA holds its own discretionary powers, as set out by law, all recommendations put forward by the Regulator are overseen every to minute detail. These recommendations have always been taken positively and implemented in the subsequent years. The report contradicts itself when it states that there is a lack of transparency and accountability in the IIP, as itself mentions the review and recommendations by a Regulator. The level of statistical information that is produced on a yearly basis in the Regulator’s report also seems to have gone unnoticed in this report.

On the other hand, there are some claims in the report which could have easily been clarified should the authors have taken into consideration our feedback.

The report goes on to mention individuals who were included in the so-called ‘Kremlin list’. It also goes on to say that these individuals were not on sanctions lists, and this list has been widely regarded as being too similar to a Russian Forbes list, and as such was simply a list of rich Russian individuals which in itself does not imply any wrong doing. Malta has the highest rejection rate of all programmes, at around 25% compared to only 10% of other jurisdictions, and this unfortunately seems to have gone unnoticed in the report by TI and GW.

In 2014, the Government issued a public tender for the design and implementation of a Maltese citizenship by investment programme, which was won by Henley & Partners. Along the years the role of the concessionaire was limited to the marketing of the programme, with MIIPA taking full control of the application process and due diligence.

During the first four years, the Government of Malta generated an income of around €700 million. The Government is committed to using 70% of Malta Individual Investor Programme (IIP) contribution amounts payable to NDSF, to undertake initiatives for the benefit of current and future generations.

The NDSF is run by a dedicated independent agency. The agency seeks to re-invest the funds into infrastructural and social projects to the benefit of local citizens.

Apart from the acquisition of shares in the Lombard Bank which is referred to in the report, the NDSF Board of Governors approved a social grant of up to €950,000 for the purpose of upgrading the equipment at Mater Dei Hospital Cardiology Department’s two catheterisation suites.

The government also pledged a €5 million donation to Puttinu Cares, a Support Group that offers a holistic approach of care for families with children suffering from cancer, which will go towards the purchase of land or a block of apartments of around 30 apartments in central London, providing accommodation facilities closer to treatment hospitals.

Very recently, the Prime Minister also announced plans regarding a €50 million investment for the building of around 500 social housing units, over and above the current 680-apartment social housing project already started on a number of different sites for a total investment of €108 million.

The experience of our nation since launching the IIP has been largely a positive one. The programme has generated an interest in our country from all across the globe. Investor interest is at an all-time high, and ideas of possible mutually beneficial partnerships are flourishing. One of the factors contributing to Malta’s success is that the venture is not profit-driven, but to attract rare talent that will further benefit the country’s economy.

The wealth behind the Maltese programme is not monetary. It is attracting families who become proud Maltese citizens not looking to make money but wanting to become part of another country to contribute to the already rich diverse nature through personal and cultural relationships. New Maltese citizens are enriching the country by contributing to local charities, from cancer patients to persons with disability, animal welfare, as well as promoting local arts, culture and the upkeep of heritage sites. To date 100 registered NGOs have benefitted from 624 donations bearing a total value of €3.8 million.