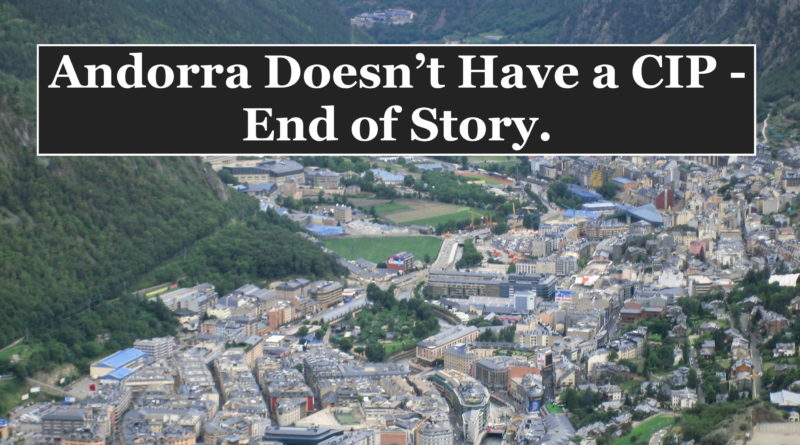 After several email exchanges, the firm has informed IMI’s editor that they have removed the “programs” in question from their website and explained that their intention was never to propagate inaccurate information but that they were merely taken in by the same email campaign as other service providers, and unwisely passed it on to their own mailing list.

The firm’s head has offered an apology for any confusion caused and promised to discontinue the email campaign.

A representative of the firm has explained that they are new to the industry, were not familiar with the range of legitimate programs available, and merely passed on to their clients information received from other sources.

The company in question is not guilty of any wilful misdirection, merely of indiscretion and naïveté, and IMI has now removed mentions of the company’s and the representative’s names from our articles in recognition of the demonstrated contrition.

offer passports from countries like Andorra, Romania, and the Dominican Republic, none of which have any formal citizenship by investment programs.

“We have received several inquiries from existing and potential clients recently asking us about an Andorra program, which we’ve found alarming. I have spoken with my industry peers and they too are receiving such questions from their clients, which is a cause for concern,” writes Gareth Brookes of Brookes & Partners in an email.

He adds that “there is no Citizenship by Investment program in Andorra, Dominican Republic, or Romania as things stand today”.

The firm purports to help clients obtain citizenships in Andorra, Romania, and the Dominican Republic, starting at €68,000, €80,000, and US$30,000, respectively, and further claims clients will receive their passports within “3-4 weeks”.

The company also offers a 25% discount to applicants who pay the whole amount up front (but don’t worry; there’s a 14-day money-back guarantee).

The email from the UK firm urges applicants not to hesitate to take advantage of “these amazing (and fleeting) offers”:

“If any of these extraordinary offers are of interest to you, I must urge you to take advantage of them quickly. The prices will not remain this low for long and the programs will not last forever. This is a brief window of opportunity, but a very rewarding one for those savvy enough to take advantage of it.

I look forward to your prompt response to make sure you can take advantage of one or more of these amazing (and fleeting) offers.”

Andorra: We don’t have a CIP

John Hanafin, CEO of Dubai-based Next Generation Equity, told Investment Migration Insider he had received several inquiries about the “Andorra Passport Program”, which prompted him to get in touch with Andorran authorities.

A representative of ACTUA (the Agency for Economic Promotion of Andorra), responded that while it was possible to obtain residence in the country through investment, no citizenship by investment program existed in Andorra.

“Andorran Citizenship (understood as holding an Andorran passport) is subject to quite demanding conditions (20 years of residence in the country and integration test),” wrote the representative in her response.

Upon learning that a fictitious Andorran CIP was being promoted online, she wrote that the agency had “escalated this to the competent authority in our country and we will try to take some direct action in the UK as well”.

“It’s critical that the industry does all it can to prevent bogus firms and programs making their way to unknowing families who are seeking citizenship help and advice to try and maintain a legitimate and professional standard wherever possible,” commented Brookes, adding that serious service providers had a duty to protect the industry and the public from such scams.

“Thanks to platforms like IMI Daily we can get the message out to the public that when considering a citizenship program one should always run a simple acid test and do a Google search on a program that’s being offered. From there you can see how many legitimate firms are advertising and mentioning it in their materials. If Google comes up and shows little to nothing then it’s extremely unlikely that a program actually exists,” said Brookes.

“Obtaining an illegal citizenship is a serious international crime and is likely to end in arrest and detainment. Over the years there have been examples of a Ukrainian citizenship scam with people obtaining illegal citizenship by altering and falsifying family documents to show citizenship by descent with a false family member being Ukranian and we are well aware of several arrests at immigration desks when trying to use such documents when traveling,” cautions Brookes.

Have you received emails related to the fake Andorra CIP or other fraudulent schemes? If so, let us know in the comments on Linkedin or Facebook, or contact us on cn@imidaily.com