OPINION OF THE EDITOR:

The mainstream media is once more abuzz with a fresh round of “revelations” about offshore holdings after hackers stole 13.4 million confidential documents from Appleby, a law firm, and leaked them to the press.

The scandal, we are expected to conclude, is not that the Paradise Papers constitute the second largest theft of proprietary information in history, nor that the press gleefully used the stolen information to publish detailed accounts of the private finances of hundreds of individuals who had not committed any crimes, but rather that multinational corporations and people with lots of money are not paying more taxes than what is legally required of them.

That companies and people who can afford expensive tax advisors use them to devise intricate cashflow structures to (gasp!) reduce their taxes is about as revelatory as an investigative report telling us Charlie Sheen is a drug user.

What’s being attacked in the Paradise Papers is not illegal tax evasion, but rather the manner in which firms and individuals of means employ the sophisticated mechanisms at their disposal to legally minimize their tax burdens.

Apple, for example, is held up as an example of a big greedy company that doesn’t want to pay its “fair share” because they use complex and creative tax domicile solutions to reduce their taxes. The only reason Apple needs to use complex and creative structures in the first place is that governments have created a byzantine web of tax regulations. Since Tim Cook is the CEO of a publicly listed company and has a fiduciary (and legal) responsibility to his shareholders to give them as much return on their invested capital as he can, he is not going to pay any more taxes than he absolutely needs to.

If Tim Cook decided – out of the goodness of his heart or the softness of his brain – to re-domicile all of Apple’s activities and pay the prevailing US corporate tax rate (sometimes as high as 38%), not only would he be fired long before he could execute his kooky plans, he would be sued six ways from Sunday for willful misconduct, and rightly so. 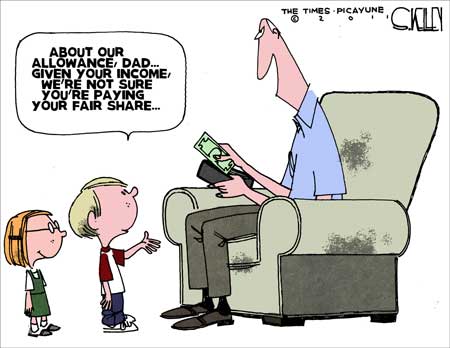 Rich individuals, as well, are chided for not paying their “fair share”. The term is used liberally, but its definition is fuzzy. What’s a fair share? The top one percent of income earners in the United States pay nearly half the income taxes. The top fifth pay 94.8% of all income tax. About half of Americans pay no tax at all. Sound fair to you?

Let’s be honest about what taxation really is.

Taxation is a very elaborate form of soft extortion, one in which its perpetrators have managed to institutionalize their crime, codify it into a set of written laws, and even to convince many of their victims that the non-consensual deprivation of the fruits of their labor is somehow not only necessary but also moral.

The state is a well-organized, comprehensive infrastructure for soft extortion. It has honed the craft to such an extent that it is able to appear as though it is not even extorting anyone, but rather presents itself as benevolent and “in service to the people”.

It’s easy to forget that they’re really extortionists, especially because the leaders of these rackets don’t look like Tony Montana, but rather are often charming, eloquent people (take it from me; I’ve interviewed several of them and found it quite enjoyable) who, more often than not, don’t think of themselves as extortionists because they’ve bought into the same illusion as the rest of us.

So sophisticated is this soft extortion infrastructure, that it almost feels as if you’re not being extorted at all. Almost. Until you stop paying your taxes. Try that, and you’ll quickly see that the state will escalate until you either pay up, or get thrown in a cell. It almost never goes that far, of course, because people know what happens to those who firmly refuse to pay taxes. Google Irwin Schiff.

I’d like to make one important distinction here: Politicians, of course, should definitely be hung out to dry if they are found to avoid taxes that they themselves impose on others. 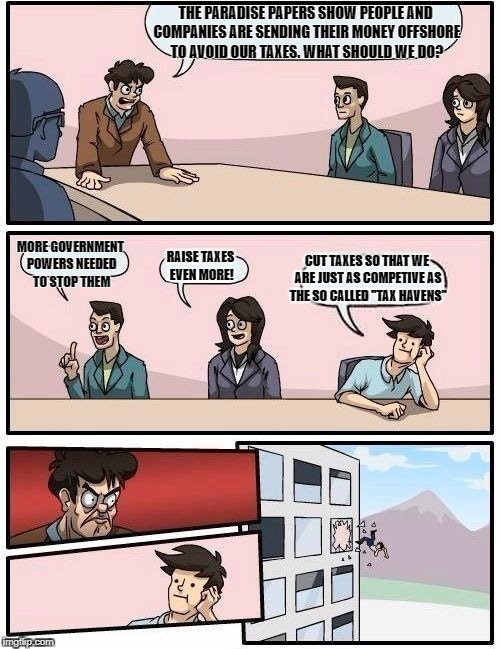 local rackets who lure people and capital to their shores by promising to only extort you a little bit.

The bigger rackets, naturally, are not very pleased about this practice; how are they supposed to squeeze people for half their earnings when they can go to some beach-with-a-flag jurisdiction and keep most of what they make? These tax havens are ruining everything! Better put them on some blacklist.

To chastise the rich on moral grounds, for finding ingenious ways to legally avoid being robbed is preposterous. We should not rebuke, but rather celebrate and emulate them.

Alas, so comprehensively successful has the racket been at instilling in its victims an image of its own legitimacy that not only does it not need to fence in its tax cattle to prevent them from escaping the milking; the tax cattle themselves actively monitor each other and will start mooing the second one of their number starts heading for the hills.

And that is perhaps the most disappointing spectacle of this entire affair; the most zealous opponents of offshore theft avoidance structures are not governments themselves; rather, fellow tax victims – journalists, anti-tax haven activists, artists – are leading the charge against those among us creative and fortunate enough to find legal means of avoiding extortion. It’s a crab bucket mentality on a civilizational scale.

The problem isn’t that the rich are able to find ways to pay less in taxes; the problem is that everyone else isn’t.

Many will doubtless protest that it is our duty to “contribute to society”, that they pay their taxes gladly, and that we owe it to the state to pay taxes because it provided schools, hospitals, and roads, as if we had a say in the matter; as if we were ever given the option to forego these services. If you gladly pay your taxes, we don’t really need laws to enforce them. And why stop there? Why don’t you gladly pay some more taxes?

Here’s a personal favorite of mine: “Tax is the price we pay for a civilized society, and if you don’t like it you can leave”. Hey, Parrot! If you don’t like this cage, there are plenty of other cages in the zoo!

Others yet, will assert that offshore theft sanctuaries are costing the state hundreds of billions in taxes. It’s true that they do, and that is a good thing, because it means the money is in more capable hands. When you leave money to fructify in the pockets of companies and individuals who have a track record of investing capital in ways that make it multiply, it can compound much faster than if you leave it the hands of spendthrift and/or incompetent bureaucrats.

The state’s track record as a custodian of capital – with a few notable exceptions – is appalling. Nearly all major countries are massively indebted because nearly all of them spend far more than they can extort in any given year. Government is like a giant black hole into which money gets vacuumed at alarming rates, never to be seen or heard from again.

Tax havens, for lack of a better term, are a crucial counterbalance to the avaricious governments of the rich world. Were it not for impudent little islands in the English Channel and the Caribbean offering alternatives, there’d be nothing stopping Brussels and Washington from fleecing us all.

If the rich have found clever ways to pay less in tax, good for them! Now teach the rest of us how to do it too.