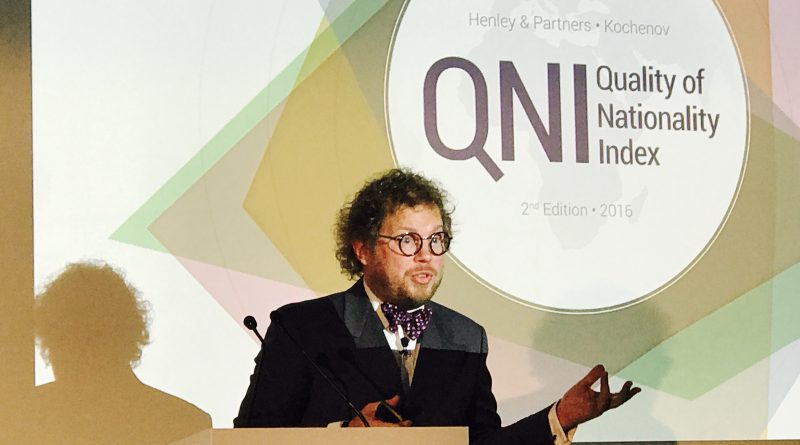 Investment Migration Insider has previously sung the praises of the Quality of Nationality Index, which the editor considers to have the best data and soundest methodology of all the citizenship/passport indices.

Today, at a well-known modern art museum in London (which made the author sign an indemnity form promising not to name it) before a swankily clad assembly of international press representatives, Professor Kochenov and Henley & Partners launched the second edition of the Index. Investment Migration Insider also attended the launch, upon invitation from the organizers.

Below follows an overview of the key findings in this year’s Quality of Nationality Index, as described by Kochenov and Henley & Partners (emphasis mine):

Germany’s quality of nationality is ranked first in the world, according to the Henley & Partners – Kochenov Quality of Nationality Index (QNI), which was launched in London today. Consistently securing the top spot for the last six years, Germany scored 82.7% out of a possible 100% on the index – the first of its kind to objectively rank the value of every nationality of the world in terms of legal status in which to develop your talents and business. The global mean in 2016 was 39.32%, with Afghanistan sitting at the bottom of the index with a score of 14.6%.

Following closely behind Germany are France and Denmark who share second place on the index with a score of 82.4%. Iceland ranks third overall at 81.3%. The UK also made it into the Extremely High category on the index, just missing out on a ‘Top 10’ place by coming 12th with a score of 79.2%. The US, meanwhile, ranked only 29th on the QNI with a score of 68.8% — mainly due to its relatively low Settlement Freedom compared to nationalities of the EU Member States, and its weak showing on the Peace and Stability element of the index.

Prof. Dr. Dimitry Kochenov, a leading constitutional law professor with a long-standing interest in European and comparative citizenship law, says the key premise of the index is that it’s possible to compare the relative worth of nationalities, as opposed to, simply, states. “Everyone has a nationality of one or more states. States differ to a great degree — Russia is huge; Malta is small — Luxembourg is rich; Mongolia is less so. Just as with the states, the nationalities themselves differ too. Importantly, there is no direct correlation between the power of the state and the quality of its nationality. Nationality plays a significant part in determining our opportunities and aspirations, and the QNI allows us to analyze this objectively.”

“Before the launch of the QNI, no single, credible source existed that ranked the nationalities of the world. The second edition of the QNI — which represents the status quo as on 10 October 2016 — reflects the quality of all the world’s nationalities. It also includes a number of new nationality and status entries, such as Israeli laissez-passer, South Sudan, and eight British nationalities/statuses. The methodology has also been updated to include territories such as Dutch and French overseas territories, US territories, Greenland, and the Faroe Islands as settlement destinations,” says Kochenov.

Brexit and the implications for UK nationality

This second edition of the QNI also interrogates the quality of a post ‘hard Brexit’ British nationality, comparing it to its current status. According to Kochenov, a hard Brexit could leave the UK with a nationality that doesn’t enjoy settlement and work rights in 30 leading states, overwhelmingly impairing the quality of its nationality. The QNI research shows that even if you presume no economic loss to the UK as a result of leaving the EU and focus only on the external rather than internal components of nationality quality, the UK will be in a free fall in terms of its quality, losing its value very sharply and by far exceeding the losses experienced by the countries in the midst of bitter political and armed conflicts, as well as divided societies whose nationalities are at the forefront of failing to perform, such as the Syrian and Libyan nationalities.

“The UK is about to establish a world record in terms of profoundly undermining the quality of its nationality without going through any violent conflict, falling from the elite group of Extremely High Quality nationalities to the Very High Quality group, changing its neighbors in the ranking from the likes of Switzerland and Germany to the likes of Brazil and Romania. The moral is simple: EU citizenship is an extremely valuable resource and getting rid of it — crippling citizens’ horizon of opportunities — should not be taken lightly,” Kochenov concludes.

Dr. Christian H. Kälin, a leading specialist on international immigration and citizenship law and policy, and Group Chairman of Henley & Partners, says the QNI is relevant to both individuals interested in their own mobility, the possibilities and the limitations of their nationality, and governments focused on improving the local, regional and global opportunities inherent in their passports.

Kälin says, “The reality that the QNI describes is in many respects regrettable: in the majority of circumstances, our nationality plays an important role in establishing a highly arbitrary ceiling for our opportunities and aspirations, reflecting the core concept of being a national of just one particular place. The QNI provides an empowering perspective that serves to help individuals with the important decisions they must make regarding where to live and raise a family, do business, and enjoy a satisfying global lifestyle, in order to define their future.”

“The QNI is relevant and of interest to all individuals, and a vital resource for those who are financially independent and wish to enjoy the benefits of alternative citizenship, as it provides assistance in selecting the most valuable second or third nationality. Over the last decade there has been a growing trend amongst wealthy and talented individuals to build up a citizenship portfolio to ensure greater international opportunity, stability, freedom and security for themselves and their families,” Kälin adds.

The seven nationalities rising furthest in the ranking in 2016 are five Caribbean states, Timor Leste and Colombia, all of which benefitted from significant improvement to their Travel Freedom scores due to the opening up of visa-free tourist and business travel to Europe’s Schengen area:

Over the last five years, Colombia has risen the most on the QNI, climbing by 48 positions to 62nd place. Timor-Leste, which climbed the highest in the latest ranking, is also the second highest climber from 2012–2016, rising by 28 positions overall.

Most of the nationalities which lost significant quality have been affected by political instability or serious conflicts in their respective countries. Such developments have a severe impact on their Peace and Stability score as well as an indirect impact on the Human Development, Economic Strength, and Travel Freedom elements of the index. The Syrian Arab Republic fell the most over the last five years, decreasing its rank by 27 places to settle on 154th position on the 2016 index. Libya — the second largest faller on the index between 2015–2016 — is also the second largest faller over the last five years, dropping by 21 positions to 145th place.