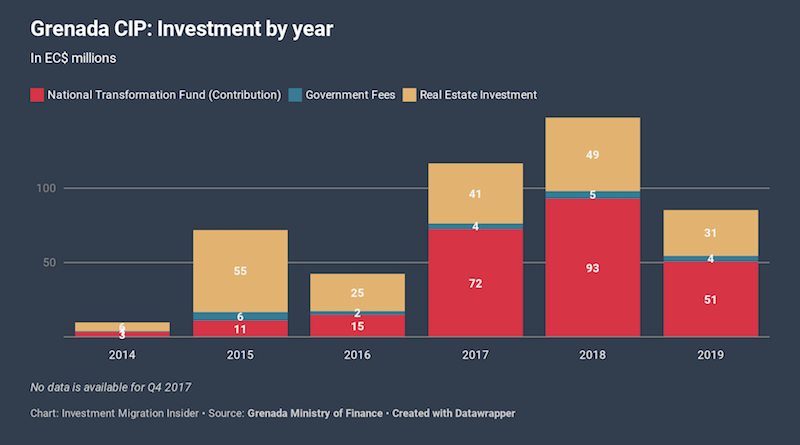 In the first half of 2019, 138 main applicants and 407 of their dependents gained approvals under the Grenada Citizenship by Investment Programme. On an annualized basis, those are record figures that would imply a 13% increase in approvals as compared to the first half of last year.

Even more pronounced is the increase in dollar-terms; by the end of H1 2019, the program had garnered donations, investments, and fees amounting to more than EC$86 million, some 60% of the revenue collected in all of 2018.

At 32 approvals, investment under the real estate option is markedly up in Q2 compared to the preceding quarter, in which only 12 applicants opted for the property route. Applications (as opposed to approvals) under this option, however, remained stable at 32 and 30 for Q1 and Q2, respectively.

In dollar-terms, investment in real estate during Q2 more than doubled that of last quarter, from EC$8.9 million to EC$21.6 million.

The number of rejected applications rose sharply to thirteen in Q2, up from only three in Q1. In May alone, Grenada declined the applications of 10 investors, all applying to the NTF contribution option. At a total of 16 in the first half of the year, Grenada’s rejection number for 2019 has already surpassed that of all preceding years, with the exception of 2017, in which 25 applicants saw their petitions turned down.

Thomas Anthony, who’s headed the Grenada Citizenship by Investment Unit over the last four quarters, had his last day at work on August 15th. The CIU is reportedly looking for a new helmsman and has instated former Chairman Percival Clouden as its interim CEO, who has in turn been replaced by Ronald Theodore.

The new leadership has its work cut out already; a dispute between, respectively, the land-owner and the developer of the Levera Beach Resort, a CIP-approved project, has seen tensions in the program’s real estate sector reach fever pitch in recent weeks. The developers have sued for US$20 million, claiming – among other things – fraudulent misrepresentation. A Grenada judge has ordered a freeze on the land-owner’s assets. Complicating matters is the land-owner’s use of Mr. Clouden’s photo in its promotional materials.