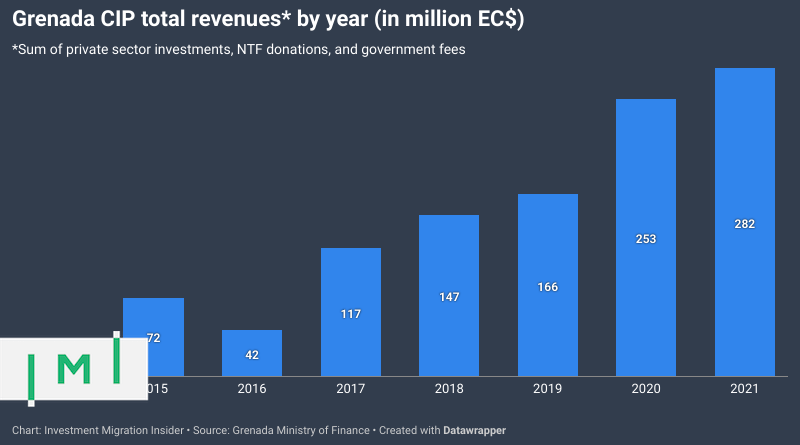 For the fifth year in a row, Grenada’s citizenship by investment program recorded yet another all-time revenue high in 2021, Q4 figures from the country’s Ministry of Finance revealed.

The program broke a number of records in 2021:

Total revenues (real estate investment, NTF contributions, and government fees combined) reached a total of EC$282 million (US$104.3m) an 11.5% improvement on 2020. This is the first time program revenue has breached the US$100 million mark.

The CIU received a record 566 applications during the year, up a remarkable 44% from 2020. At a record 402, approvals are up as well, although by a more modest 7.2%. The discrepancy between the relative growth in applications and approvals is attributable to the applications' concentration in the second half of the year; a great deal of these will only have been processed in Q1 2022.

Grenada granted a total of 1,272 citizenships under the program during the year, another all-time record and one that exceeds the previous record from 2020 by 14.5%.

Revenues from both real estate investments and government fees set new records as well, reaching EC$161.3m and EC$32.3m respectively, representing increases of 6.6% and 86.7% from the previous year.

Productivity at the CIU also reached a high watermark this year; the Unit processed (either approved or rejected) 140 applications during Q4, the highest such quarterly figure on record.

The balance between the real estate and donation options remained relatively constant for the year as a whole; 59% of investors opted for real estate, compared to 58% in 2020.

Viewed at a more granular level, however, the fluctuations in investors' option preferences become more apparent. At around the time of the Kawana Bay crisis, investment in real estate dipped considerably. Since then, it has seen three straight quarters of expansion.